Congress Foundation Day: On the occasion, the Congress will take out marches across the country to take its "Save Constitution-Save India" message to the people. 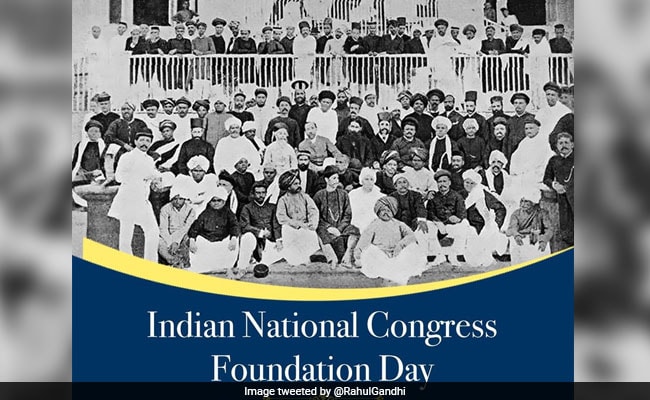 Rahul Gandhi acknowledged contribution of millions of Congress workers through the ages.

On Congress' 135th foundation day today, the party leaders paid heartfelt tributes to the party leaders who sacrificed their lives for the nation and also remembered what the party stands for. Congress chief Sonia Gandhi hoisted the party's flag at its headquarters at 24, Akbar Road and distributed sweets to children along with former Prime Minister Manmohan Singh, senior Congress leaders AK Antony, Motilal Vohra and Anand Sharma.

"Sacrifice for the nation stands above all else for the Congress party. From the time of our foundation, through the Indian independence movement and for all the days to come, India comes first," the party said on its official Twitter handle.

Former Congress president Rahul Gandhi, in a tweet, acknowledged the selfless contribution of millions of Congress workers through the ages.

"On our foundation day, let us acknowledge the selfless contribution of millions of Congress men and women through the ages," he wrote.

Congress general secretary Priyanka Gandhi Vadra shared that Congress is voice of every Indian and it stands for love, brotherhood and peace.

"We are the voice of the last man standing on the edge of society. Love, brotherhood and peace are the facets of truth. We take pledge to stick to our ideology of non-violence and kindness. We are the Congress," she wrote.

Sharing with you all, a portrait of women members of the @INCIndia on 135th #CongressFoundationDay. A grand old party with an unparalleled history of contributing to India's freedom & nation-building. pic.twitter.com/zly8x8y8t7

"The beginning of a journey that led to India's Independence and defined #InclusiveIndia," tweeted Congress leader Shashi Tharoor on Congress Foundation Day.

On the occasion, the Congress will take out marches across the country to take its "Save Constitution-Save India" message to the people.