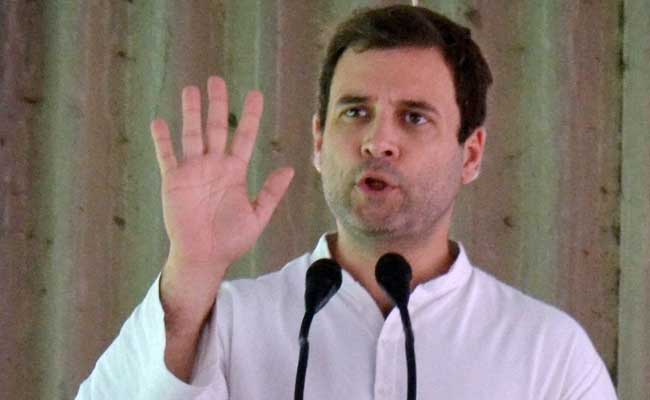 Rahul Gandhi began his 'Kisan Yatra' as an effort to reach out to the people of Uttar Pradesh.

New Delhi: A day after Congress vice president Rahul Gandhi's "Khat Sabha" began in Uttar Pradesh, where the locals created a havoc by running away with all the brand new cots, the Bharatiya Janata Party (BJP) took a swipe at the grand old party and said that the party is trying to launch and relaunch their vice president and are failing in every endeavour.

Taking a jibe at the Congress party, BJP spokesperson Sambit Patra said the people of Uttar Pradesh have taken the cots more seriously than Rahul Gandhi.

"There have been efforts by the Congress party to launch and re-launch Mr. Rahul Gandhi. We have seen previous instances during the UP assembly elections previously as well as Lok Sabha elections of 2014 that there were attempts by Congress Party for Rahul Gandhi which failed," Mr Patra said.

"Yet, again there is a trial by Congress to launch Rahul Gandhi from the cot by "Khat", but this launch process is also failing," he added.

He further said that the mad rush of people was more concerned about the cot to take home than Rahul Gandhi.

He began his 2500 km-long 'Kisan Yatra' as an effort to reach out to the people of Uttar Pradesh.

He reached out to the farming community while cornering the centre and Samajwadi Party government for not addressing their concerns despite making tall claims.

"Day1 of the Kisan Yatra ends in Gorakhpur. Tremendous energy & support from the people throughout the journey today.Looking fwd to tomorrow!," Rahul Gandhi said in a tweet.

The Congress vice-president had earlier said his yatra is aimed at helping the poor, farmers and labourers secure their rights.

Promoted
Listen to the latest songs, only on JioSaavn.com
The "Khat Sabha" with Uttar Pradesh farmers took a dramatic turn when all the local supporters began decamping with the "khats" (cots) from the venue that had been laid out by his party.

There was unprecedented ruckus and commotion at the ground in Deoria, where the rally was held, after which people started fighting over the cots to take them home.