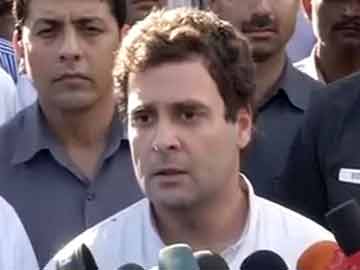 Chandigarh: A day after exit polls predicted that the BJP is all set to form governments in Maharashtra and Haryana, Congress Vice-President Rahul Gandhi was seen far from the heat and dust of the elections - interacting with students of Panjab University in Chandigarh.

The party also argues that anti-incumbency will be a bigger factor in these polls as the party has ruled Maharashtra for 15 years and Haryana for 10 years.

Unlike the Lok Sabha polls, Mr Gandhi wasn't the face of the party's campaign in these states. It was led by the chief ministers and other state leaders.

The Congress argues that the BJP was forced to field PM Modi as a star campaigner after its poor showing in the recent by-polls.  "In Maharashtra and Haryana, BJP has no leaders whereas we have tall leaders. That's why the Prime Minister had to be fielded," said Congress spokesperson Sobha Oza.

Congress may be playing down the assembly polls as a state issue but comparisons between PM Modi and Mr Gandhi's leadership style are inevitable.

Promoted
Listen to the latest songs, only on JioSaavn.com
A group of young students of Panjab University who attended this morning's session were quick to make the comparison. "Narendra Modi is more vocal about his policies. Rahul Gandhi has not been able to send a message to the common people. I think that's the problem," said a student who didn't wish to be identified.

While no one in Congress expects an immediate revival in electoral fortunes, many argue it is high time the party brought about changes that boost the morale of an average worker.