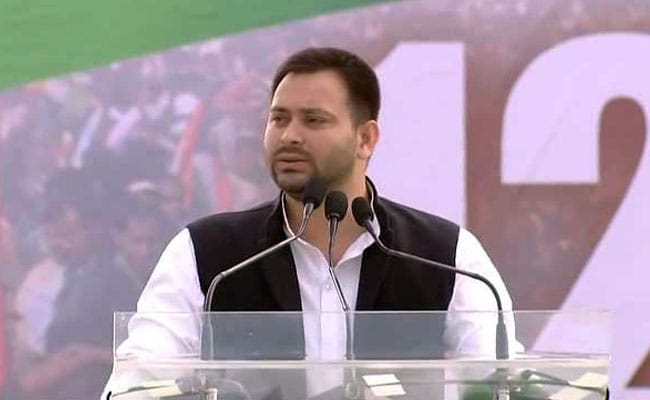 The Congress is "best equipped" to lead the opposition's charge against the BJP in the upcoming Lok Sabha polls, RJD leader Tejashwi Yadav said on Sunday, asserting that the party will have to handle its leadership role with "large-heartedness" and accommodate regional parties.

Mr Yadav also hailed the Samajwadi Party-Bahujan Samaj Party alliance in Uttar Pradesh and emphasised that his "courtesy call" meetings with Akhilesh Yadav and Mayawati post the tie-up should not be construed as a "pressure tactic" aimed at the Congress.

The Rashtriya Janata Dal leader said since Congress is India's oldest and currently the second-biggest political party having a pan-India presence, it is in a very strong position to win maximum number of seats among the opposition parties.

"I don't find anything wrong if the Congress plays a pivotal role in forming the alliance or taking the leadership role of the alliance into the elections. But having said that, they have to accept that each state has different ground realities," Mr Yadav said.

The Congress, being the party with national acceptance and maximum footprint in the opposition, is "undoubtedly best equipped" to lead the opposition''s charge against the Bharatiya Janata Party or the National Democratic Alliance, the former Bihar deputy chief minister asserted.

"However, the Congress will have to handle their leadership role with large-heartedness and play a proactive role by accommodating regional parties with their agenda.

"In states where Congress don't have a robust base, it must allow regional outfits to occupy the frontal-attack position against the BJP," Mr Yadav said, emphasising that regional parties have a greater ability to transfer votes.

The concentration is on winnability, hence the coalition must be decided state-wise and seat wise, said the 29-year-old son of former Bihar chief minister Lalu Prasad.

Every party will have to compromise or lend space to other parties depending on the situation in a particular state for forming a winning alliance, Mr Yadav said while replying to a question on whether the Congress has to be more giving to regional parties to strengthen the opposition coalition.

Asked if leaving out the Congress from the SP-BSP tie-up will impact the opposition's national level coalition, he said the people of India feel they have been "duped badly" and have made up their mind to get rid of "propagandists" for their own well-being.

The people are wise enough to understand which fighting block can be their best bet to defeat the BJP, he said.

Tejashwi Yadav''s remarks come amid hectic efforts by the opposition to forge a strong alliance to take on the BJP in the general election.

Leaders from several opposition parties, including Tejashwi Yadav, came together on Saturday, vowing at a mega rally in Kolkata to put up a united fight in the coming polls and oust Prime Minister Narendra Modi from power.

Prime Minister Modi had earlier hit out at the Mahagatbandhan for the polls, saying it was an "unholy alliance" of various political parties for "personal survival". The BJP has also slammed the SP-BSP tie-up in UP.