Two BJP lawmakers from Uttar Pradesh fought each other with fists and shoes at an official meeting on Wednesday. 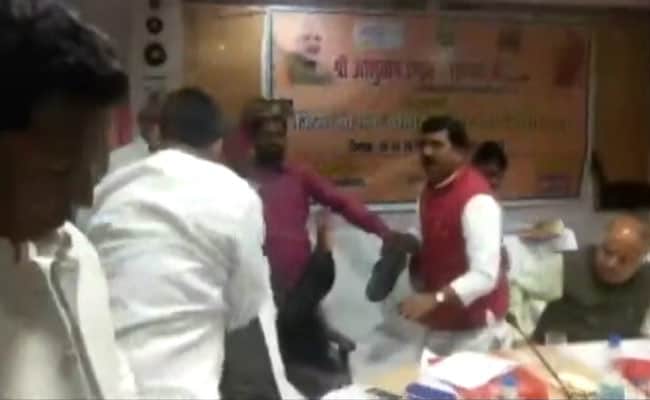 The Congress on Wednesday took a swipe at the BJP after a video of the ruling party's leaders thrashing each other with shoes surfaced, saying the BJP was the "Bharatiya Joota Party".

"Today's entertainment was provided by the Bharatiya Joota Party. Disclaimer: This act has been performed by experts, please do not attempt this on anyone," the party tweeted from its official handle.

Two BJP lawmakers from Uttar Pradesh fought each other with fists and shoes at an official meeting on Wednesday. The incident took place in Sant Kabir Nagar, about 200 km from capital Lucknow, in full public view and in the presence of journalists.

BJP Member of Parliament Sharad Tripathi thrashed MLA Rakesh Baghel with shoes in the presence of the district officials and media. Mr Baghel also tried to hit him, as others tried to separate them.

After the BJP promised action against the two leaders, Mr Tripathi expressed regrets at the incident. "I regret the incident and feel bad about it, what happened was against my normal behaviour. If I am summoned by state chief then will put my point across," he was quoted by news agency ANI as saying.

Opposition leaders, meanwhile, attacked the BJP over the disgraceful incident.

"Today in Uttar Pradesh, a parliamentarian and a legislator of the party - that claims to the world's most disciplined - respectfully exchanged blows with their shoes. This is the frustration of the BJP that is expecting a defeat in the upcoming elections.The truth is that the BJP is not being able to find candidates for the polls," Akhilesh Yadav said in a sarcastic tweet.