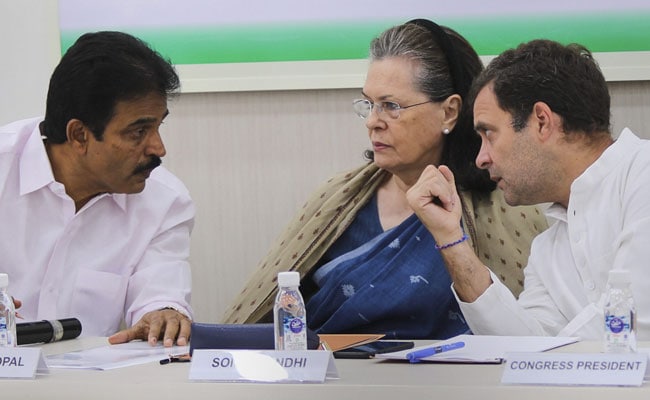 Rahul Gandhi categorically told senior leaders that the Congress should look for his replacement.

The Congress today asked the media to "respect the sanctity" of the closed-door meeting of its working committee and "not fall into the trap of conjectures or speculations". The statement by the party's senior leader Randeep Surjewala comes as the party is under immense pressure following its decimation in the national elections and the decision of its chief Rahul Gandhi to quit the post.

Mr Gandhi has been firm on his resolve - announced at the closed-door meeting of the Working Committee on Saturday. The party had refused to accept it and various leaders urged him to rethink. Today, Mr Gandhi categorically told senior leaders Ahmed Patel and KC Venugopal that the party should look for his replacement.

Since Saturday, all meetings and appointments of the Congress chief have been cancelled. He has even refused to meet the party's newly-elected lawmakers who have called on him.

Mr Surjewala today said Saturday's meeting was a "collective deliberation on the performance of the party, the challenges before it as also the way ahead" and not about "casting aspersions on the role or conduct of any specific individual".

"We would request everyone, including the media, to not fall into the trap of conjectures or speculations and await the calibrated efforts by the Congress party towards future course of action," the statement read.

The statement came after reports that at the Working Committee on Saturday, Rahul Gandhi - roundly blamed for a disastrous campaign that made no difference to the BJP's colossal victory -- did some tough-talking, reminding party leaders that they had put their sons before the party and "pushed" for their candidature in the Lok Sabha polls.

In the recently concluded elections, the Congress has been decimated in 17 states -- including Rajasthan, Chhattisgarh and Madhya Pradesh it won in December, and Karnataka, which it rules in alliance with HD Kumaraswamy since May. The starkest symbol of it collapse was Mr Gandhi's losing the family borough of Amethi to the BJP's Smriti Irani.

Mr Gandhi said he took "100 per cent" responsibility for the party's failure and told the Congress Working Committee -- which comprises 52 members -- that he would like to exit as its top boss.

The Congress - which has been led mostly by members of the Nehru-Gandhi family since Independence - has been unable to accept Mr Gandhi's decision to quit. The party was led by Sitaram Kesri for several years after former Prime Minister Rajiv Gandhi (Rahul Gandhi's father) was assassinated in 1991. It did not do well and several leaders convinced Sonia Gandhi to take over.