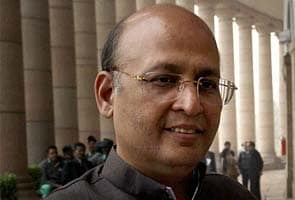 New Delhi: After a controversial CD, allegedly featuring him went viral, Congress' Abhishek Manu Singhvi today quit as the spokesperson of the Congress and also resigned as the head of parliamentary standing committee on law and justice. Mr Singhvi says the CD is doctored. (Read: Singhvi's resignation letter)

"I have done this only to prevent even the slightest possible Parliamentary disruption regarding the purported CDs being circulated about me. Since I am a disciplined party soldier, I did not think it fit to subject the party to any inconvenience on this account. All allegations are patently baseless and false," said Mr Singhvi in a statement.

"I wish to categorically state that canards and baseless allegations are being spread about alleged inappropriate conversation in the CD. People inimically opposed to me, who have assiduously spent over 10 days hearing, seeing, amplifying and distilling the CD have found no vestige of any reference, not even remotely, to any illegality, corrupt practice, or wrongdoing. Specifically, some sections of the print and visual media are spreading a falsehood simply by repetition and hearsay that there is reference in the CD to the promise of any post," he added.

After the emergence of the controversial CD two weeks ago, Mr Singhvi had gone to the Delhi High Court to get an injunction against it being made public. He said at the time, it was the work of a disgruntled employee, his driver, who he later managed to agree on an out of court settlement. But there was no such control over the reports which went viral on the internet.

The incident is likely to provoke an uproar in Parliament, which reconvenes on Tuesday to debate the budget and other bills. The main opposition, the BJP, said it planned to question Mr Singhvi's resignation in Parliament. Mr Singhvi is a member of the Rajya Sabha from Rajasthan.

Promoted
Listen to the latest songs, only on JioSaavn.com
"This is a serious matter and the party has so far restrained itself from speaking on the issue. I hope Parliament will get an explanation from him on his decision to resign," said Leader of the Opposition in Rajya Sabha Arun Jaitley.

While there is a debate in the political class about whether there should be so much scrutiny to one's private life, Congressmen say, in this case, there was no choice but to resign. And that has given the opposition extra ammunition to expose the government's weakness.