Collection Of Rare Hand-Woven Shawls To Be Auctioned In UK

Described as "treasured heirlooms", the auction house has announced that the online sale will take place between June 11 and 18 with prices ranging from 1,000 pounds to 12,000 pounds. 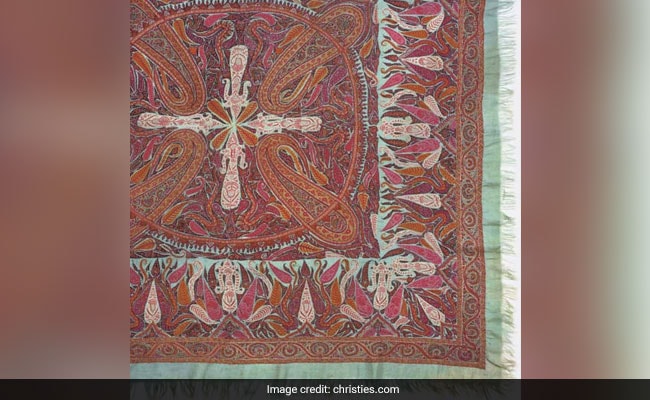 The auction notes "pashmina", as hand-woven from the softest, warmest, light-weight fabric.

A private collection of rare hand-woven Kashmiri shawls dating back to the 17th century are on offer at auction by Christie's in London.

Described as "treasured heirlooms", the auction house has announced that the online sale will take place between June 11 and 18 with prices ranging from 1,000 pounds to 12,000 pounds.

"This 'Important Private Collection of Kashmir Shawls' is perhaps the most significant collection of shawls ever to be offered at auction. Dating back from the 17th to the late 19th century, these hand-woven, decorated Kashmir shawls were created as items of luxury," Christie's said in a statement.

"Traditionally worn by men and women, these treasured heirlooms were handed down in the family for generations, prized for the very fine quality of wool used and their intricate embroidered decoration. The high level of craftsmanship achieved by Kashmiri weavers remains unmatched anywhere in the world," the statement noted.

A few highlights offering a glimpse into the "opulent" shawl collection are on display alongside Christie's Art of the Islamic and Indian Worlds sale in London until next Thursday.

The auction notes elaborate on the shawls, known in Kashmir as "pashmina", as hand-woven from the softest, warmest, light-weight fabric spun from the fine under-hair of high-altitude goats.

The weaving of this fine fabric into shawls is thought to have been done in Kashmir since the 1st century AD and remains in practice even today.

"This extraordinary collection demonstrates the high level of craftsmanship achieved by Kashmiri weavers, with skills perfected over centuries which remain unparalleled anywhere in the world," Christie's notes.

The highlights of the sale include an early 19th century square shawl with an unusual pattern, which combines the stripes with the central moon design, estimated to fetch between 7,000 pounds and 10,000 pounds.

Moon shawls are known to have been modelled after a type of 16th century carpet from the Ottoman court in Cairo. Striped examples were especially valued by members of the royal court of Jaipur in Rajasthan.

Moon shawls were also very popular in Western markets, especially with fashionable ladies in Britain in the late 18th and 19th centuries to be worn as accessories with their gowns.

Among the other major highlights include a 17th century Mughal long shawl border fragment comprising eleven singular floral motifs woven on an ivory ground, estimated to fetch between 4,000 pounds and 6,000 pounds.