Police Case Against Karnataka School After Drama On Citizenship Law

The play sent a message that people of a particular community would have to leave the country if CAA and NRC were brought into force. 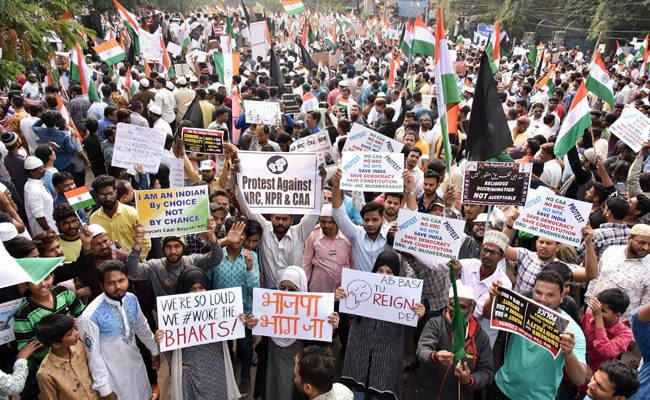 The Citizenship Amendment Act makes religion, for the first time, the test of Indian citizenship. (FILE)

A police case was registered against a school in Karnataka's Bidar district after a video of its students enacting a drama was widely circulated on social media. The play was against the contentious Citizenship Amendment Act and the National Register of Citizens and portrayed Prime Minister Narendra Modi in a bad light, according to the complaint filed by a social worker, Nilesh Rakshyal.

The drama was staged on Sunday and the video uploaded on a social media website by one Mohammad Yusuf Rahim, who was among the audience, the complainant said. There has been no response from the school so far.

"We have questioned a few students of the school in presence of their teacher. The Investigation officer had questioned them. No one has been arrested so far... the Investigation is going on," A Rangarajun, a senior police officer of Bidar, told NDTV.

Nilesh Rakshyal has claimed that the drama by the children, and the way it was widely circulated on social media platforms, could "upset peace in society" and send a wrong message about government policies and decisions.

The play sent a message that people of a particular community would have to leave the country if CAA and NRC were brought into force. Minor children of the institute were made to stage the drama, which insulted PM Modi, the complaint read.

The Akhil Bharatiya Vidyarthi Parishad - the student body linked to the BJP and its ideological mentor Rashtriya Swayamsevak Sangh -- also staged a protest against the school and submitted a memorandum to the home minister.

The Citizenship Amendment Act makes religion, for the first time, the test of Indian citizenship. The government says it will help non-Muslim refugees from three Muslim-dominated neighbouring countries if they fled to India because of religious persecution.

Critics say the bill discriminates against Muslims and violates secular tenets of the Constitution.