No Internet In Parts Of UP, Drones Fly As Cops Brace For Fresh Protests

As many as 21 protesters have been killed across Uttar Pradesh in violence so far.

The Uttar Pradesh government has placed the state on high alert and blacked out Internet connectivity in 21 districts over concerns of further protests against the Citizenship Amendment Act erupting after the Friday prayers.

Until reports last came in, Internet connectivity was suspended in western Uttar Pradesh's Bijnor, Bulandshahar, Muzaffarnagar, Meerut, Agra, Firozabad, Sambhal, Aligarh, Ghaziabad, Rampur, Sitapur and Kanpur. No such action was taken in state capital Lucknow, even though it had also witnessed clashes between the police and protesters last week.

In Agra, Internet services will be suspended from 8 am to 6 pm on Friday, news agency PTI quoted Additional Superintendent of Police Ravi Kumar as saying. In Bulandshahr, services will resume on Saturday morning, another officer said.

"We've deployed security personnel in different districts of the state and held talks with the people. Internet services have been suspended in eight districts for a day, and we're also monitoring content on social media," news agency ANI quoted Additional Director General (Law and Order) PV Ramasastry as saying.

Police took out a flag march in sensitive areas of Gorakhpur and held meetings with peace committees in all circle and police station areas. District Magistrate Vijyendra Pandiyan said paramilitary personnel and drones equipped with cameras will also be deployed to keep an eye on the situation.

Violence broke out in many parts of the state between December 19 and 21, claiming the lives of as many as 21 protesters. Although many of the bodies bore gunshot wounds, the state police insisted that they did not shoot anything other than plastic pellets and rubber bullets. They have owned up to opening fire only at Bijnore, where a 20-year-old civil services aspirant was killed.

In an attempt to justify their retaliatory action, the state police recently released a series of photographs and videos showing two men firing at cops during protests against the controversial law. Deputy Chief Minister Dinesh Sharma claimed that the police had also suffered heavy losses. "As many as 288 policemen were injured in violence that erupted across 21 districts. Sixty-two of them suffered firearm injuries," he said at a press conference. 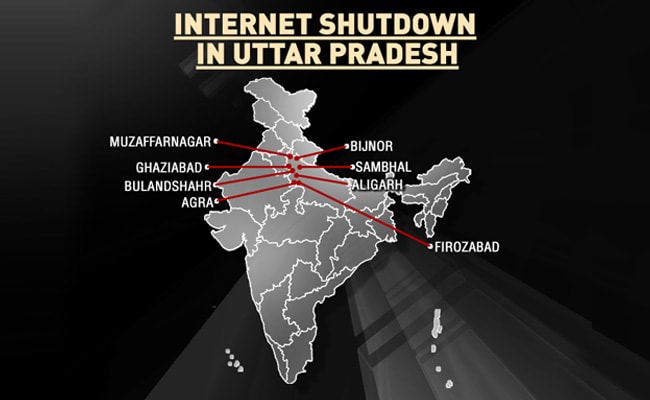 Places where Internet is banned in the country

Police have registered 327 cases and carried out as many as 5,558 preventive arrests so far. A few days ago, Prime Minister Narendra Modi commended the state police for successfully quelling  protests in the state.

Opposition leaders, however, were far from convinced. "The maximum number of deaths during the CAA/NRC protests was reported from Uttar Pradesh. The state government should probe these deaths and come forward to help the families of those innocent," Bahujan Samaj Party chief Mayawati said in a tweet.

Congress general secretary Priyanka Gandhi Vadra also visited Bijnor to meet the families of two people killed in clashes that followed the enactment of the Citizenship Amendment Act. Even the National Human Rights Commission has issued a notice to the Uttar Pradesh police chief over complaints of human rights violations in the state.

Students of the Jamia Millia University have declared that they will picket the Uttar Pradesh Bhawan at 3 pm on Friday to protest "police atrocities" in the state.