Prime Minister Narendra Modi's use of the prefix "Chowkidar" on his twitter handle has created a storm on both sides of the political divide. 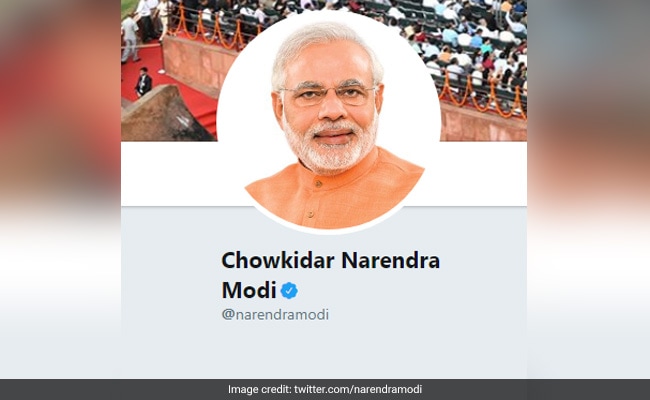 The "Main Bhi Chowkidar" campaign had taken social media by storm, the minister said. With the hashtag being tweeted 20 lakh times and 1,680 crore impressions, it has become a "people's movement", he added.

The Prime Minister's use of the prefix "Chowkidar" on his twitter handle has created a storm on both sides of the political divide. While his ministers, party leaders and supporters rushed to get on board, the opposition hastened to disparage it.

It even triggered a counter-campaign from Hardik Patel -- the newest Congress entrant who made headlines for spearheading the quota stir of the Patidar community.

This morning, irked by the Congress campaign, a Haryana's BJP minister Anil Vij took a swipe, saying if the party did not like the prefix Chowkidar, "You too prefix #Pappu before your names. We won't mind that".

The "Main Bhi Chowkdar" campaign was the BJP's comeback to Congress jibes that used the phrase with which PM Modi had described his battle against corruption ahead of the 2014 elections.

Over the last year, "Chowkidar chor hai (the watchman is a thief)," has been Rahul Gandhi's slogan to hammer in the party's claim that PM Modi had been involved in corruption and crony capitalism in the Rafale fighter jet deal.

At the end of Day One, PM Modi tweeted: "Fellow Indians, Happy that #MainBhiChowkidar has ignited the Chowkidar within all of us. Great fervour! Ecstatic to see the passion and commitment to protect India from corrupt, criminal and anti-social elements. Let us keep working together for a developed India."