Chopper with pilgrims on board crash-lands near Jammu; seven injured 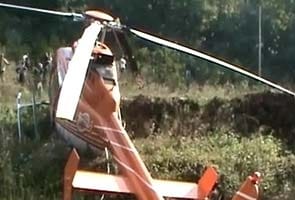 Jammu: Seven persons, including the pilot, were injured when a Pawan Hans helicopter carrying Vaishno Devi pilgrims made an emergency landing in the Trikuta mountains located in the Reasi district of Jammu and Kashmir, following a technical fault detected soon after take-off.

The helicopter, with 6 pilgrims on board was returning from the Sanjtichat-based helipad and made an emergency landing at the Salal-Dabri area after the pilot detected a technical snag, according to Jagjeet Kumar, Deputy Inspector General (DIG), Udhampur-Reasi range.

During the emergency landing, the helicopter tilted due to non-availability of space resulting in injuries seven people, including the six pilgrims, the DIG said.

A Pawan Hans official in Delhi said the pilot detected the technical fault in the engine and made a "precautionary landing" at Katra.

Police teams were rushed to the spot from Bhawan and Katra belts and the injured have been hospitalised.

Promoted
Listen to the latest songs, only on JioSaavn.com
Katra is a small town situated in the foothills of the Trikuta mountains, where the holy shrine of Vaishno Devi is located. Pawan Hans helicopter services are used to ferry pilgrims between the Sanjichat-based helipad and Katra base camp.