Bihar Election Results: Scrutiny by the Election Desk showed that Nitish Kumar's could have been the single-largest party if its every candidate had not had to contend with an opponent from Chirag Paswan's LJP.

Bihar Elections 2020: As of now, the NDA's main opponent, Tejashwi Yadav, has the most seats in the state

Chirag Paswan has played a very wicked game in Bihar, managing to relegate Nitish Kumar and his party to third place in the state that he is credited with reforming through good governance.

Analysis by NDTV's Election Desk shows that had Chirag Paswan not opposed Nitish Kumar so whole-heartedly, the 69-year-old's burning ambition for a fourth term as Chief Minister would not be so largely dependent on the promises made by his ally, the BJP.

At 9 pm, results were still being counted. The BJP and its main opponent, Tejashwi Yadav, were breathtakingly tied for the status of the single-largest party. And Nitish Kumar's party was in third spot and in considerable ignominy. Chirag Paswan's party only won a single seat.

Scrutiny by NDTV' Election Desk showed that Nitish Kumar's could have been the single-largest party if its every candidate had not had to contend with an opponent from Chirag Paswan's LJP.

"The BJP seems to have achieved its goal of reducing Nitish Kumar to junior partner - which was the goal of the Chirag Paswan move," said Pavan Varma, who was a close aide of Nitish Kumar till he was expelled from their party 10 months ago. 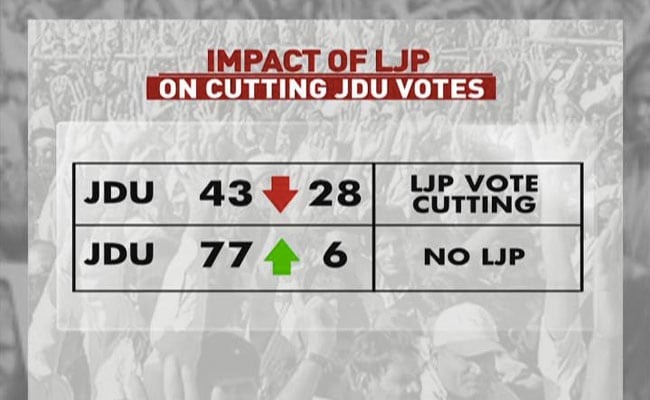 That is the view of many political experts and critics of the BJP - that it used Chirag Paswan, its other ally, as a proxy, chomping into the share of Nitish Kumar, a strategy that had revealed itself during the hectic campaign.

With Chirag Paswan serving as a vote-cutter, the BJP benefits from a huge role reversal for the first time in its lengthy and not always happy combine with Nitish Kumar. It has distinctively eclipsed the man who for years swore that he would have nothing to do with Narendra Modi, who was then Chief Minister of Gujarat. In 2010, Nitish Kumar famously cancelled a dinner in Patna to avoid mingling with Narendra Modi. Today, if he has a chance at becoming Chief Minister, it is because of the BJP and the indomitable personal appeal of the Prime Minister, who have made huge gains in the state.

"We will decide by this evening on leadership and government formation," said Kailash Vijayvargiya of the BJP to NDTV this morning. If that seemed like a loaded comment, implying that Nitish Kumar may not in fact be chosen as the Chief Minister of the alliance if indeed it presents as the winner, the BJP leader added some confusing fine print. "Nitish Kumar will be the Chief Minister, that was our poll promise."

It is true that senior leaders of the BJP, including the PM, declared Nitish Kumar as their presumptive Chief Minister even after Chirag Paswan made it clear that he would not skimp on trying to damage Nitish Kumar so heavily that, he promised, the BJP and he would form the government with no role for anyone else. The BJP's reassurance that Nitish Kumar would not be benched, no matter what the result, was reportedly made after Nitish Kumar made clear his displeasure over Chirag Paswan's assured targeting of him, choosing to appear considerably later than scheduled at a joint press conference with the BJP in Patna.

Publicly, however, neither the PM nor any senior BJP leader reproached Chirag Paswan for either his declared mission or his blunt attacks on Nitish Kumar. This brazen breach of coalition ethics was seen as proof that the BJP was standing guarantor for Chirag Paswan and his wild ride. For his part, Chirag Paswan declared his devotion as "Hanuman to the Prime Minister", marked a cross on every candidate of Nitish Kumar's party, and virtually none against the BJP. A labour of love, as he put it.

In 2015, Nitish Kumar began his third term because his ally at the time, Lalu Yadav, chose to honour their political prenup - that irrespective of who won the most seats, Nitish Kumar's role as Chief Minister was guaranteed. So this is not the first time that he comes to the table with less bargaining power than his partner. But the fact that this time, it was an inside job, is bound to grate heavily on a man who has long been suspicious of the BJP's motives.

The results will take till later tonight to be finalised. But this conclusion seems incontrovertible - that Nitish Kumar's heavily-diminished stature, his ability to manage a far more powerful BJP, and his reaching for a fourth term all have the imprint of a careful collusion. Just what he was afraid of.