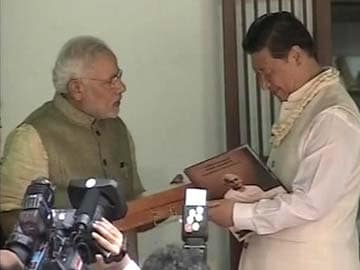 Source at the ashram told IANS that the Chinese president was taken to the black and white photograph exhibition on the Indian freedom struggle and historic Dandi march.

Gandhiji's famous mass movement - the Dandi march - began from the Sabarmati Ashram March 12, 1930. Mahatma Gandhi and 78 companions embarked on an unprecedented and unique march to protest the British salt law.

Sources added that President Xi took off his shoes and sat bare feet on the floor to spin Charkha at the Hruday Kunj where Mahatma Gandhi lived. PM Modi too joined him.

The Chinese president wrote in the visitor's book of the ashram with the hymn "Raghupati Raghav Raja Ram" being sung in the background.

The Hruday Kunj - with its elegant, airy and simple architecture - is where Mahatma Gandhi spent a good period of time.

The prime minister presented to President Xi a book "Gandhi in Amdavad" published by the ashram, a replica of Mahatma Gandhi's charkha and a historic picture of Gandhiji's famous Dandi march.

Promoted
Listen to the latest songs, only on JioSaavn.com
Both President Xi and PM Modi sat at Hruday Kunj for a while.