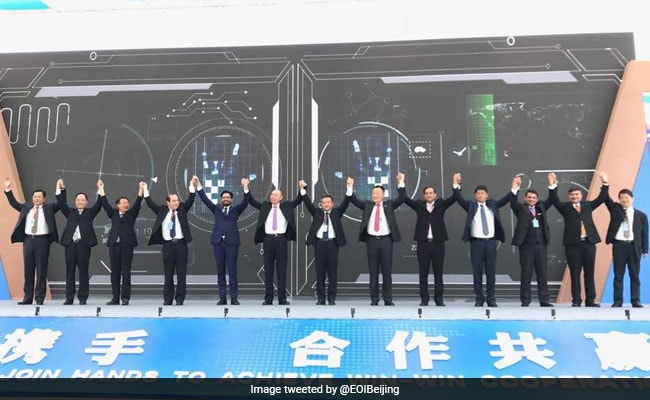 Delegates at the launch of India's second IT corridor in China

New Delhi: India launched its second "information technology corridor" in China on Sunday to cash in on the burgeoning Chinese software market, which remained elusive despite the presence of top Indian tech firms in the large Asian nation. India's first IT corridor in China was launched in the Chinese port city of Dalian last December, with a focus on Internet of Things or IOT.

The National Association of Software and Services Companies or NASSCOM has now set up one more digital collaborative opportunities plaza, also known as the SIDCOP platform, in China's Guiyang to give market access to Indian IT firms in the huge Chinese market, the NASSCOM said in a statement.

Agreements worth $6 million were signed between Indian service providers and Chinese customers at the launch of the corridor by China's Guiyang municipal government and the NASSCOM, an official of the industry lobby group said.

The pilot projects launched on the SIDCOP platform would be executed over the next year, a NASSCOM statement said.

India's top IT firms have a big presence in China. The IT corridor at Dalian is expected to provide a gateway for big as well as small and medium-sized enterprises. The Dalian IT corridor was formally launched a few days ago.

While the Dalian corridor's focus was on IOT or Internet of Things, the Guiyang corridor will focus on big data, said Gagan Sabharwal, senior director, global trade development NASSCOM.

At the launch of the Guiyang IT corridor, India's ambassador to China Gautam Bambawale said the corridor will promote local offices and help companies from Guiyang to set up software and IT units in India.

Indian company Zeta-V will set up an artificial intelligence-enabled platform for SIDCOP to bring together the IT requirements of Chinese companies, particularly in Guiyang, Mr Bambawale said.

"In this way, we will be marrying together the requirements of Chinese companies with the capabilities of Indian IT service providers. We visualise that these initiatives will give a big impetus to cooperation between India and China in the IT-enabled services sector," he said.

"In the last 1,600 years, the economies of India and China have contributed about 50 per cent of the global economy," PM Modi had said during the informal summit. President Xi stressed that "a good China-India relationship is an important and positive factor for maintaining peace and stability in the world". PM Modi had also proposed a five point agenda for bilateral ties - common vision, better communication, strong relationship, shared thought process and a shared resolve.