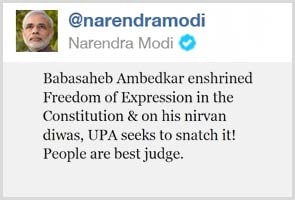 Thirteen diamond traders from India, who have been in jail in China for nearly two years, have been found innocent of smuggling charges and will be deported soon. The Gujarat government says they owe their release to  Chief Minister Narendra Modi's "diplomatic efforts and statesmanship" during his trip to Beijing last month.

Another two traders found guilty of smuggling will also be freed soon because they have served most of their sentence already.

Mr Modi said, "During my visit to China in November, I took up the case of 22 Indian youth, who are lodged in Chinese jail, before the Chinese leadership purely on humanitarian ground. I emphasized that Indian nationals languishing in Chinese jail since last two years should be given speedy trial and they should get justice. I am thankful to the Chinese Government for expediting the trial and ensuring that judgment is delivered today."

Promoted
Listen to the latest songs, only on JioSaavn.com
The diamond traders were arrested by Shenzhen customs officials for allegedly smuggling diamonds from Hong Kong to China on January 8, 2010. Shenzhen is a major city in China's Guangdong province close to Hong Kong.