Calling the boundary dispute as not the "whole story" of the China-India relationship, Chinese Foreign Minister Wang Yi said that both countries were friends and partners but they should shed suspicion at each other. 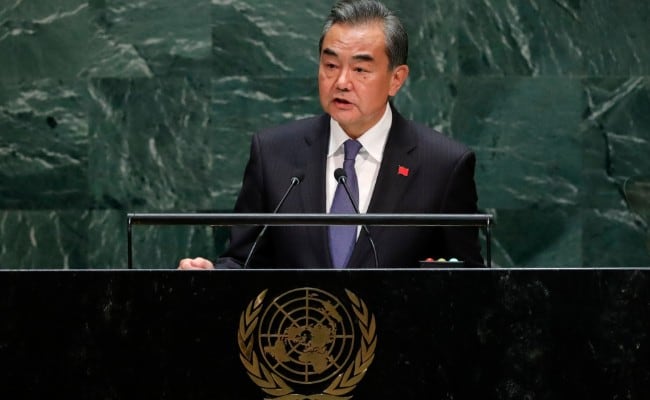 Calling the boundary dispute as not the "whole story" of the China-India relationship, Mr Wang said that both countries were friends and partners but they should shed suspicion at each other.

Answering a question at his annual press conference on the current state of India-China relations following the tense standoff in eastern Ladakh since May last year and how Beijing viewed the relationship going forward, he said it is important that both countries manage their disputes properly and expand bilateral cooperation.

"The boundary dispute, an issue left from history, is not the whole story of the China-India relationship. It is important that the two sides manage disputes properly and at the same time expand and enhance cooperation to create enabling conditions for the settlement of the issue," Mr Wang said at an online press conference held on the sidelines of the annual session of the National People's Congress, China's Parliament.

In his lengthy answer, Mr Wang, who is also a State Councillor, did not touch upon the recent disengagement of troops from the north and south banks of the Pangong Lake area in eastern Ladakh after the 10th round of military-level talks between the two sides.

Mr Wang's comments on the border issue came days after he held a 75-minute telephonic conversation with External Affairs Minister S Jaishankar during which the latter emphasised that the disengagement of troops at all friction points is necessary to bring peace and tranquillity on the border and for the development of bilateral relations.

On Friday, India's Ambassador to China Vikram Misri met Chinese Vice Foreign Minister Luo Zhaohui and called for completing the disengagement of troops from all areas in eastern Ladakh, saying that it would help restore peace and tranquillity at the border and provide conditions for progress in bilateral ties.

Mr Wang pointed out that the world expects both China and India to safeguard the common interests of the developing countries and advance multipolarity in the world.

The similar national conditions of the two countries also mean that they share the same or similar positions on many major issues, he said. "Therefore, China and India are each other's friends and partners, not threats or rivals."

"The two sides need to help each other to succeed instead of undercutting each other. We should intensify cooperation instead of harbouring suspicion at each other," he said.

Without directly referring to the eastern Ladakh standoff, Mr Wang said, "the right and wrongs at what happened at the border area last year are clear, so are the stakes involved."

"We are committed to settling the boundary dispute through dialogue and consultation. At the same time we are resolved to safeguard our sovereign rights," he said, reiterating China's stance on the border standoff.

Mr Wang said it falls on both sides to solidify the existing consensus, strengthen dialogue and communication and improve the various management mechanisms to jointly safeguard the peace and tranquillity in the border areas.

On how China looks to move forward its relations with India after the border standoff, Mr Wang said, "in the year ahead we hope India will work with China to truly deliver on the important common understanding reached by our leaders that the two countries are not threats to each other but opportunities for each other's development."

Both sides should consolidate existing consensus, strengthen dialogue and communication, improve the control mechanism and jointly safeguard peace in the border areas, he said, expressing hope that India will meet China halfway in the new year to benefit both peoples.

"Together we can bring greater benefits to the 2.7 billion people in China and India, make greater contributions to the advent of the Asian Century," he said.

He said the China-India relationship is essentially about how the world's two largest countries get along and pursue development and rejuvenation together.

"As two ancient civilisations, next door to each other and as two major emerging economies with each over one billion people, we have broad common interests and tremendous potential for cooperation," he said.

The border standoff between the Indian and Chinese armies erupted on May 5 last year following a violent clash in the Pangong Lake area and both sides gradually enhanced their deployment by rushing in tens of thousands of soldiers as well as heavy weaponry.