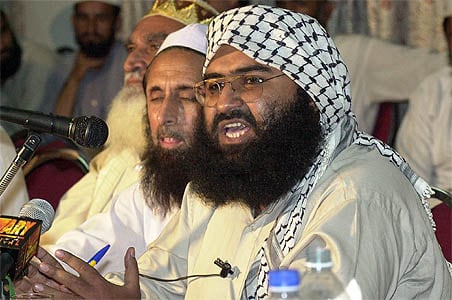 New Delhi: With China blocking UN Security Council sanctions against Jaish-e-Mohammad chief Masood Azhar, India has provided detailed information to it about his involvement in terror activities and hopes Beijing would support the move.

"We have shared with China the necessary information and our assessment about Masood Azhar," a source said but refused to specify whether the material was provided during the talks.

"India and China have similar concerns with regard to terrorism and we hope China will support the move to proscribe Azhar by the UN Security Council," the source added.

India is making efforts to get Azhar along with LeT terrorists Azam Cheema and Abdur Rahman Makki banned by the Security Council in December last year.

Azhar, founder of JeM outfit, is one of the three terrorists freed by India in exchange for hostages of Air India plane IC-814, which was hijacked in December 1999.

China has been blocking the effort, arguing that it did not have the necessary information about Azhar's involvement in terrorism.

Britain had earlier joined China in blocking the move but agreed to support after India provided information.

Promoted
Listen to the latest songs, only on JioSaavn.com
India now hopes that China will support the move, particularly in view of the recent unrest in Xinjiang province whose source is believed to have been in Pakistan.

The UNSC Resolution had put a ban on Jamaat-ud-Dawa, declaring it as a front for LeT, which was held responsible for the Mumbai terror attack.  Afterwards, an effort was made to get Saeed proscribed by the UNSC but it was blocked by Britain and China, which wanted it to be put on hold.