Arvind Kejriwal's Aam Aadmi Party said that the Delhi Police, controlled by the BJP-ruled centre, had repeatedly failed at protecting the Chief Minister.

Arvind Kejriwal was attacked with chilli powder at the Delhi secretariat.

On video, the audacity of the attack is difficult to miss. A man who hands Delhi Chief Minister Arvind Kejriwal a letter outside his office, swoops down to touch his feet, gets up and forcefully smears chilli powder on his face. The incident took place inside one of the capital city's most protected buildings today, the Delhi Secretariat, provoking outrage from Mr Kejriwal's party and even critics.

The attacker, identified as 40-year-old Anil Kumar Sharma, has been taken into custody, the police said. After saying they were investigating if the chilli powder "fell unintentionally", the police late on Tuesday night filed a case against the attacker.

Arvind Kejriwal was leaving for lunch after finishing up meetings when the incident took place outside his chamber on the third floor, AAP lawmaker Alka Lamba said.

She accused the Delhi Police, which is controlled by the BJP-led central government, of "completely failing" to ensure the Chief Minister's security.

"The Delhi Police has repeatedly failed to stop anti-social elements from entering the secretariat. They are doing this on the directions of the BJP that rules the centre," she said. 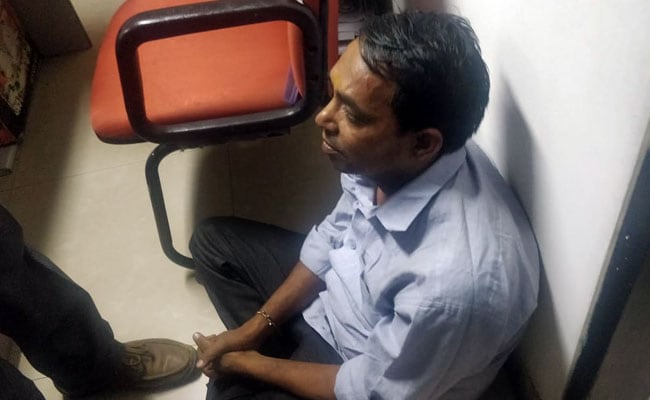 The man, identified as Anil Kumar, was caught after the attack.

Despite the alarming video, the police said it was investigating if the incident was "unintentional", according to news agency ANI. They claimed a chilli powder was found on the man after he was removed by security personnel.

Calling it a dangerous attack, Mr Kejriwal's Aam Aadmi Party alleged the BJP had sent out word that whoever targeted the Chief Minister or his party would be protected. "We will not be scared away by the thugs sent by the BJP," Deputy Chief Minister Manish Sisodia said.

The BJP's Delhi unit condemned the incident. "I strongly condemn it. This should not be tolerated or justified. The matter should be investigated," Delhi BJP chief Manoj Tiwari said.

Other BJP leaders were less sympathetic.

Attention seeking Kejriwal up to his antics again!! #DramaQueen

However, former AAP leader Yogendra Yadav who had a public falling out with Mr Kejriwal, spoke out against the attack. "Sad and shocked to hear about this attack. Relieved that the CM is safe and unhurt. Everyone must condemn this. Period. Blame game can wait, please. In any case, blaming the victim shows moral degradation," he tweeted.

"Attack on Arvind is cowardly and dangerous. Delhi police has lot to answer. This is a serious security breach. Politics of hate and venom had killed Bapu. Hate politics has to stop. India needs healthy democracy not violence," another former AAP leader Ashutosh said.

Mr Kejriwal, 50, has in the past been attacked with ink, slippers and slapped while campaigning for elections.