On Chilli Powder Attack On Arvind Kejriwal, A Shocker From Delhi Police

Delhi Chief Minister Arvind Kejriwal was attacked by a man with chilli powder inside the Delhi Secretariat on Tuesday. 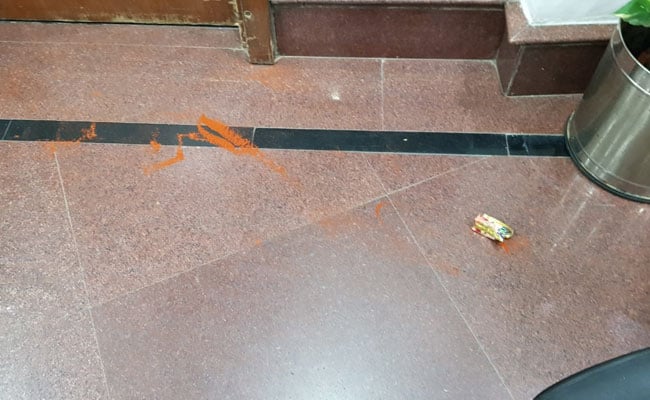 As it faced piercing criticism for the attack on Delhi Chief Minister Arvind Kejriwal inside the state secretariat, the Delhi Police said it was investigating if the incident was "unintentional".

"Anil Kumar came to meet Delhi Chief Minister Arvind Kejriwal in the secretariat to share his grievances. He handed a note to the Chief Minister and touched his feet, and chilli powder fell down from his hand. Probe underway whether it was an attack or powder fell unintentionally," a police spokesperson told news agency ANI.

In a separate statement, the police said, "Anil Kr. Sharma bowed down to touch the feet of Hon'ble CM, the CM security tried to remove him and it resulted in dropping of specs of CM. Subsequently security personnel removed him aside and found him carrying a pouch in his hand, which got torn and apparently containing chilly powder (sic)."

The police's claims, however, seemed to conflict the course of events captured on a security camera in the hallway.

The video shows 40-year-old Anil Kumar Sharma swoop down to Mr Kejriwal's feet, get up and forcefully smear chilli powder on his face. Mr Kejriwal escaped without any serious injury to his eyes because of his spectacles while those around him tried to tackle Sharma.

What a shame !!@DelhiPolice under @LtGovDelhi already planting stories to protect the attacker.

Absolute rubbish. As eyewitness to the incident I depose that the CM was attacked. Instead of investigating the Delhi Police is shrugging all responsibility & planting stories in the media. Shameful turn of events, CCTV footage bears complete truth. https://t.co/jxGyT9nJ8P

Yeah looks so unintentional. Specially when he was just trying to clean Arvind Kejriwal's glasses.

The Aam Aadmi Party has blamed the Delhi Police for a "serious security lapse". Party leaders have said the Delhi Police, which is controlled by the BJP-led central government, of repeatedly failing to ensure the Chief Minister's security even in the highly-protected secretariat.