A villager in Chhattisgarh had fallen from the tractor and was crying in pain when a CRPF patrolling team heard his cries and decided to help. 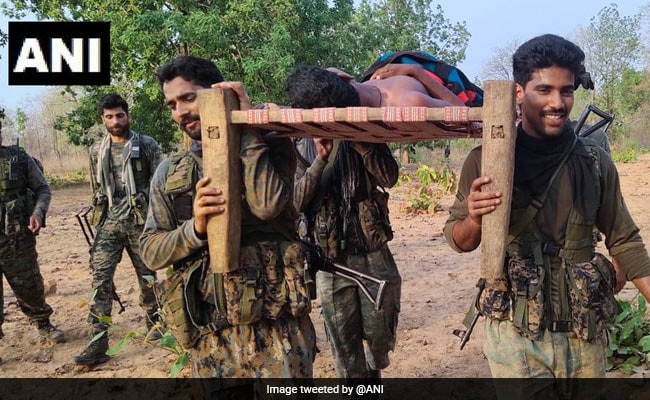 CRPF soldiers walked for five kilometres through a thick jungle carrying the man on cot.

Carrying an injured man on a cot, CRPF soldiers in Chhattisgarh walked for five kilometres through a thick jungle to get him treated at a hospital. Their gesture has won them praises from the villagers.

The villager, Andu, had fallen from the tractor and was crying in pain when a CRPF patrolling team heard his cries and decided to help.

"At around 3 pm on Friday, a team was patrolling the Burgicheru area under Deputy-Commandant Kameshwar Sahu. When the patrol team was passing through a village, they heard the cries of a young boy who had fallen from a tractor," said Prem Kumar from Commandant of 204 Cobra battalion.

"The soldiers of the patrol team - Anurag Dangi, Ayan, Vikas Tushavar, Rakesh Kumar, Durga Prasad, and Anil Kumar - carried the boy all the way to the hospital on a cot," Mr Kumar added.

The injured villager is being treated in Bijapur District Hospital and his condition is said to be stable.