Former Chief Minister Kamal Nath had said that the movement ought to be viewed as an awareness drive. 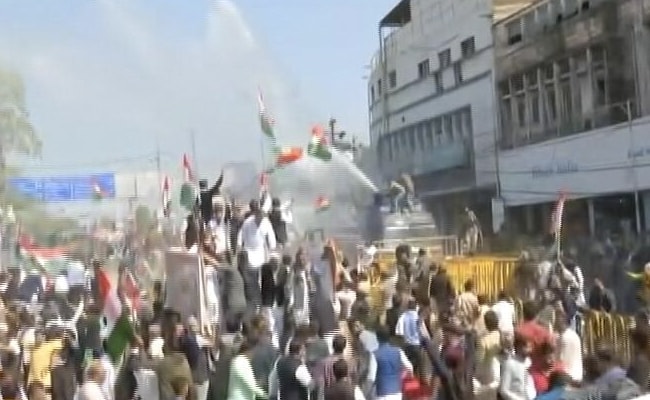 Some Congress workers and a few police personnel were mildly injured in the clash.

The Madhya Pradesh Congress's two-week-long programme in support of the farmers protesting against three Central laws came to a rather chaotic end today in capital Bhopal as the police used tear gas and water cannons to disperse the party's march towards Raj Bhawan. What began as a mass of party workers led by former Chief Minister Kamal Nath waving and cheering ended utterly muddled as the police finally resorted to a baton-charge. Some Congress functionaries and a few police personnel were injured in the clash.

Hundreds of Congress workers first gathered at the city's Jawahar Chowk area a little before noon, planning to march to and gherao Raj Bhavan, the official residence of Governor Anandiben Patel. Mr Nath had said earlier that the Congress's movement ought to be viewed as an awareness drive. Visuals showed him, along with other senior Congress leaders atop a bus, leading the party workers in the event.

As the rally approached Raj Bhawan, the police began to sound out warning notes. As the marchers began wrestling the barricades, senior officials announced on loudspeakers that force will be used to deter them. Soon they used water cannons on the Congress workers and followed it up with tear gas canisters.

The @INCMP two-week-long programme in support of the #farmers protesting against 3 Central laws came to a rather chaotic end today in capital Bhopal as the police used tear gas and water cannons to disperse the party's march towards Raj Bhawan @ndtv@ndtvindia@INCIndiapic.twitter.com/N3AWnGbx3T

Dramatic visuals show a sea of people carrying placards and flags rushing away from an advancing force of policemen. Another video shows a group of people surrounding a police vehicle when a water cannon is used against them.

A mild baton-charge later, the crowd began to break up as many fled.

Thousands of farmers from Punjab, Haryana, Uttar Pradesh, and other states have camped in and around Delhi in protest against the three farm laws passed by Parliament in September. Several political parties, including the Congress, have voiced their support to the agitating farmers.

Ten rounds of talks later, the protesters and the government reached a deadlock yesterday, with the latter proposing to hold the three laws in abeyance for 1.5 years. The farmers are yet to respond to the proposal.