The 33-year-old techie has claimed to have spotted Chandrayaan 2's rover - Pragyan - which seemed to be "intact" on the moon's surface. 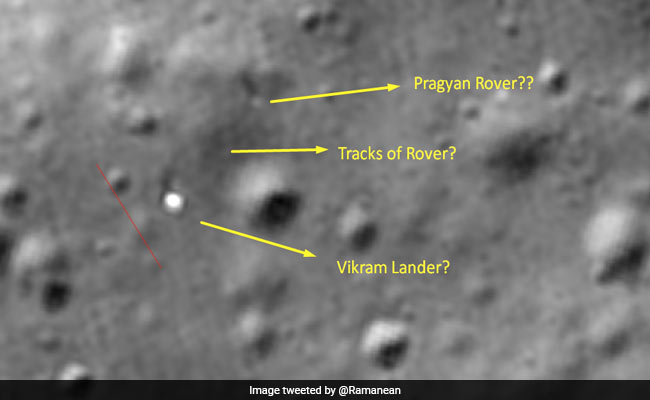 The techie claimed the rover had "rolled out a few metres from the skeleton Vikram lander."

Chennai-based engineer Shanmuga Subramanian, who was credited by NASA last year for spotting the debris of the lander of Chandrayaan 2, has come up with a new find. The 33-year-old techie has claimed to have spotted Chandrayaan 2's rover - Pragyan - which seemed to be "intact" on the moon's surface.

In a series of tweets along with a picture taken by NASA's Lunar Reconnaissance Orbital (LRO), Mr Subramanian claimed that the rover had "rolled out a few metres from the skeleton Vikram lander."

Chandrayaan2's Pragyan "ROVER" intact on Moon's surface & has rolled out few metres from the skeleton Vikram lander whose payloads got disintegrated due to rough landing | More details in below tweets @isro#Chandrayaan2#VikramLander#PragyanRover (1/4) pic.twitter.com/iKSHntsK1f

The space enthusiast also said that the lander may have received the commands sent to it from earth and also might have relayed it to the rover. However, it may have failed to communicate back to earth.

Rover's png image - It can be downloaded from here https://t.co/9z6wanh8xU and also the cube file which can be viewed by USGS ISIS3 software https://t.co/VhUejZlq9upic.twitter.com/nxJlLcpYIe

Indian Space Research Organisation (ISRO) had lost contact with the lander Vikram following its launch from Chandrayaan 2 moon orbiter on September 6 when it tried to make soft-landing near the moon's south pole.

Mr Subramanian has also mailed ISRO about his latest find, a screenshot of which he shared on Twitter.

India had expected to make space history with the Rs. 1,000 crore Chandrayaan 2 mission.