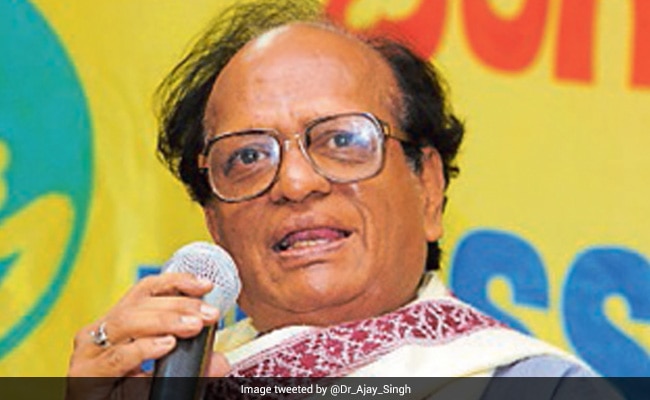 Noted Kannada literary figure Chandrashekhar Patil popularly known as 'Champa' has died at a private hospital on Monday morning, due to age-related ailments.

He was 82 and is survived by wife, a son and a daughter, sources close to his family said.

He was suffering from age-related ailments and was shifted to hospital last night as his health situation deteriorated, they said.

An activist by nature, he was one of the foremost voices of the 'Bandaya' genre of Kannada literature.

He has participated in several literary and farmers' movements or agitations including Gokak agitation, Bandaya movement, anti-Emergency agitation among others, and was a strong proponent of Kannada language as a medium of instruction in schools.

Chandrashekhar Patil, who was professor of English from Karnataka University, was the editor of the influential literary journal 'Sankramana', and had also served as Chairman of Kannada Development Authority.

He is recipient of Karnataka Sahitya Akademi Award and Pampa Award among others. He had returned the Pampa Award, the highest literary honour of Karnataka, in protest against the assassination of his friend and scholar M M Kalburgi in 2015.

His popular works include poetries like- Banuli, Madhyabindu, 19 Kavanagalu, also plays like Kodegalu, Appa, Gurtinavaru, among others, including several essays. He also wrote in English like- "At the other end", which is an anthology of his poems.

Recalling Chandrashekhar Patil's close association with his family, especially his father and former Chief Minister, late S R Bommai, he said, "His writings with independent thought were sharp. He used to hold a mirror to the system through his insightful presentation of the issues." His mortal remains will be kept at Sahitya Parishat for literary personalities, his followers and public to pay their last respects, and final rites will take place with full police honours at the Chamarajpet burial ground probably by this evening.