Chandrababu Naidu's House Under Flood Threat? Far From It, Says His Son

The former Chief Minister was earlier asked to vacate the rented house because it was allegedly built in violation of norms. 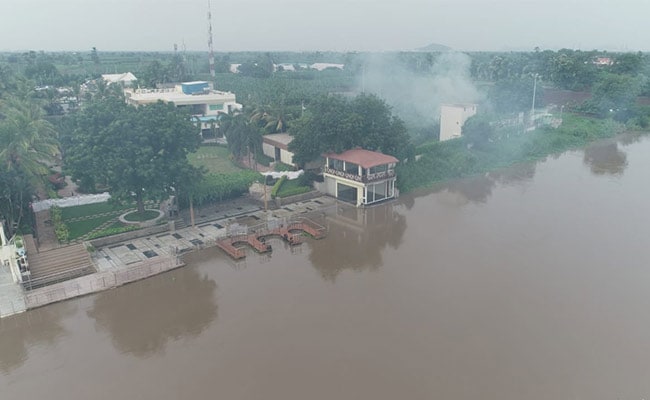 Officials say the house can come under threat if the water level rises any further.

Aerial photographs and a video of a house belonging to former Andhra Pradesh Chief Minister Chandrababu Naidu in Undavalli near Vijayawada were widely circulated on social media today. From the looks of it, the rented property located on the banks of the Krishna river seemed to be under threat of flooding amid the ongoing onslaught of the monsoon across the country.

Mr Naidu was earlier served a notice to vacate the house because it was allegedly built in violation of norms, failing to maintain the maximum flood level of 22.6 metres. Officials said the structure was constructed at 19 metres, thereby putting it at risk of submergence. It was also said to be built in violation of the River Conservation Act, Environment Green Tribunal laws and bylaws of the Capital Region Master Plan.

Mr Naidu and his family have lived in the Lingamaneni guest house on rent for over three years now.

YSR Congress MLA Alla Ramakrishna, who has been campaigning against illegal encroachments, said he visited the property this morning. "The pathway from the riverfront to the house has gone underwater. The residents have moved to Hyderabad, and it seems like the items inside have been shifted upstairs. Arrangements are made for 10,000 sandbags to prevent the house from being flooded. Security vehicles have also been moved," said Mr Ramakrishna, who represents Mangalagiri in the state assembly.

Mr Ramakrishna is also the chairman of the Capital Region Development Authority.

However, Nara Lokesh - Chandrababu Naidu's son and former IT Minister - said they moved to Hyderabad only because his father was advised to rest after hurting his hand. "The water level is undoubtedly a little high, but it is nowhere near our home. The structure is some distance away from the water. So there is no truth in the claims that we left the house or shifted our belongings upstairs for fear of flooding," he told NDTV.

Officials, however, claim that the opening of 70 crest gates of the Prakasam barrage has prevented the house from being completely flooded. They point out that while the current inflow from Pulichinthala reservoir is just 4.5 cusecs of water, the maximum inflow of up to 19 lakh cusecs that occurred a decade ago would have resulted in complete disaster.

Chief Minister Jaganmohan Reddy conducted his first collectors' meeting at the Praja Vedika, which is adjacent to Chandrababu Naidu's home. He ordered the demolition of the structure soon after the meeting concluded, saying that it violated norms related to river conservation, environment and green tribunal, among others. Notices were also served to adjacent structures.

Officials claim there is every possibility of water contamination because the structure is less than two kilometres downstream from the point where drinking water is drawn from the reservoir. They say that as both sides of the river bank are used for ritual baths and religious practices, it is the government's responsibility to safeguard the spirituality and purity of the river.

In all, 70 crest gates of the Prakasam barrage were lifted to release over four lakh cusecs of water received from the Pulichintala project.

The Kurnool, Guntur and Krishna districts are on high alert. In Tenali division of Guntur, there are concerns of flooding in 21 villages. The local revenue divisional officer has warned that the Duggirala, Kolluru, Kollipara, Bhattiprolu and Repalle mandals are under flood threat.