Flagging the same issue during the hearing of a separate plea, another bench of the court said the Centre must take steps to increase the supply. 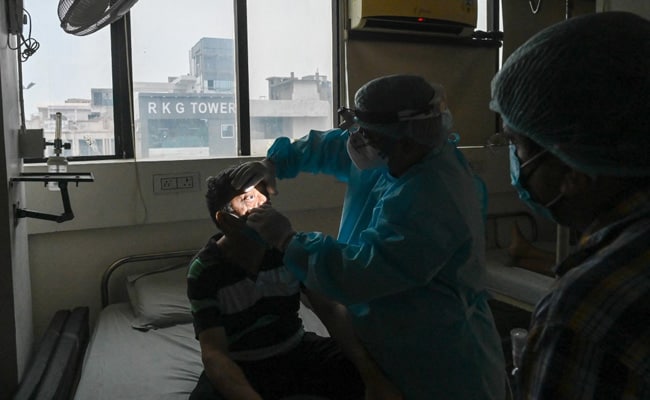 The Bombay High Court today said the Union government's allocation of Amphotericin-B, a key drug used in the treatment of Mucormycosis or Black Fungus, appeared to be irrational, and the supply to Maharashtra was not adequate considering the number of cases in the state.
Flagging the same issue during the hearing of a separate Public Interest Litigation, another bench of the court said the Centre must take steps to increase the supply.
After the state government informed that 82 people died of Mucormycosis in Maharashtra in the last three days, a division bench of Chief Justice Dipankar Datta and Justice G S Kulkarni at Mumbai asked Advocate General Ashutosh Kumbhakoni to find out if delay in the administration of necessary drugs led to these fatalities.
It also directed the Maharashtra government to maintain real-time record of Mucormycosis cases and the available stock of drugs and convey this information to the Union government so as to procure the medicines in time.
Mr Kumbhakoni told the court earlier that while the state had witnessed 512 deaths due to Mucormycosis till June 7, the figure climbed to 600 by June 10.
Additional Solicitor General Anil Singh, the Union government's lawyer, said it had allocated an average of 4,060 vials of Amphotericin-B, a key drug used in the treatment of the fungal infection, per day to Maharashtra between May 11 and June 9.
The bench, however, noted that Maharashtra accounted for 25 per cent of the total 23,254 cases in the country, and the drug allocation was inadequate and not proportional to the number of active cases in the state.
Daman and Diu had no active Mucormycosis case but the Union Territory received 500 vials, Tripura had one case but did not receive any vial while Manipur and Nagaland with one active case each received 50 vials of the medicine apiece, the court said, citing the Centre's affidavit.
"This allocation doesn't seem rational. Are the medicines really reaching where they are required? What is the distribution criteria?" the high court asked.
"The quantity (of Amphotericin-B) allocated to Maharashtra is very short. Allocation has to be dynamic and need-based pan-India. No patient should suffer for want of medicine," the court added.
If the domestic production was inadequate, the government must think about importing the drug, the court said.
The court was hearing a bunch of PILs on Covid management in Maharashtra.
Mr Kumbhakoni also told the bench that Maharashtra had started vaccination against coronavirus in prisons to inoculate staff and inmates. While most of the staff was vaccinated, 27,000 inmates were yet to be fully vaccinated, he said.
RT-PCR tests were also being conducted frequently in jails, he said, adding that in Taloja prison near Mumbai, which is highly congested, there were only five active cases of Covid.
The court said the state must not become complacent because of the decline in cases, and must keep adequate stocks of Tocilizumab and other necessary drugs.
It directed the state to file a fresh affidavit on all issues by June 15, adjourning the hearing to June 16.
Besides the principal bench at Mumbai, the Aurangabad bench also raised the issue of shortage of drug used in the treatment of Mucormycosis.
Hearing a PIL, a division bench of Justices R V Ghuge and B U Debadwar said the shortage was worrisome, and unless urgent steps were taken by the Union government for improving the supply, the death rate would not come down.
It expected the Union government to make a statement on June 16 about an increase in the supply of the drug, the court said, while asking the chief public prosecutor -- the state's lawyer -- to furnish details of recovered and active patients as well as deaths due to Mucormycosis till June 15.