Nawab Malik has repeatedly claimed the case related to the alleged recovery of banned drugs from the ship was "fake" and arrests were made just on the basis of WhatsApp chats. 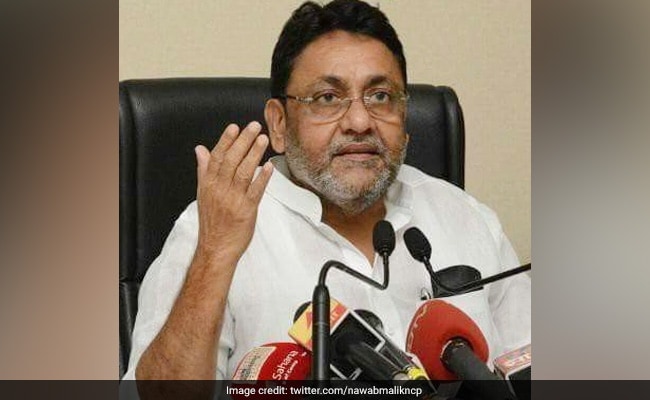 Nawab Malik's son-in-law was arrested in a drugs case in January this year. (File photo)

Training his guns again on Narcotics Control Bureau's (NCB) Zonal Director Sameer Wankhede, Maharashtra minister and NCP leader Nawab Malik on Thursday claimed the officer was specifically brought in to the agency by the central government after the death of actor Sushant Singh Rajput last year.

Mr Malik also alleged that Rajput's girlfriend Rhea Chakraborty was implicated in a "fake case" by the NCB.

Mr Wankhede supervised a raid on a cruise liner off the Mumbai coast earlier this month that led to the alleged recovery of drugs, following which Bollywood superstar Shah Rukh Khan's son Aryan Khan and some other people were arrested by the NCB.

Nawab Malik has repeatedly claimed the case related to the alleged recovery of banned drugs from the ship was "fake" and arrests were made just on the basis of WhatsApp chats.

The NCP leader's son-in-law Sameer Khan was also arrested in a drugs case in January this year and he was granted bail last month.

"After Sushant Singh Rajput's suicide, a special officer was brought in to the NCB. The suicide case was handed over the CBI, but the mystery over his suicide or murder remains unresolved. But, after that, the NCB started playing games with the film industry," Mr Malik claimed.

He said dozens of actors were "paraded "before the NCB merely on the basis of WhatsApp chats.

"Attempts were made to implicate certain people in false cases. During the COVID-19 pandemic, the entire film industry was in Maldives. What was the officer and his family doing in Maldives and Dubai? This has to be clarified by Sameer Wankhede," the NCP spokesperson said.

"We demand that he clarify whether he was in Dubai," Mr Malik said.

Was his family there in Maldives when the entire film industry was in Maldives? What was the reason behind them going there? he asked.

"We are very clear. All this vasuli (extortion) took place in Maldives and Dubai and I will release those photos," Malik said.

On Wednesday, Mr Malik renewed his demand to check WhatsApp chats of Mr Wankhede, saying it will reveal how bogus the NCB cases are.

Last week, NCP president Sharad Pawar lashed out at the Centre, accusing it of using the NCB, the Enforcement Directorate, the CBI and the Income Tax Department to target the opposition parties.