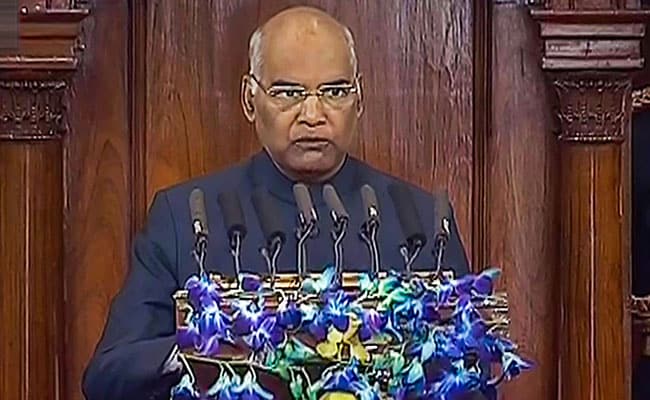 Amid speculation over an announcement of a farm relief package in the upcoming Budget, President Ram Nath Kovind on Thursday said the government is attempting to find "permanent solutions" for problems faced by farmers, who are the foundation of the economy.

The President recounted Modi government's commitment to doubling farmers'' income by 2022 and listed measures taken during the last four and half years to address farm sector issues.

The statement came a day before Finance Minister Piyush Goyal is scheduled to present the BJP government's sixth and final budget of the current tenure, during which it is widely speculated that he may announce sops to regain political ground that the BJP seemed to have lost in the recent assembly elections.

"On behalf of this august House, I compliment our annadata farmers. My government is striving day and night to attain the goal of doubling farmers' income. Understanding the needs of farmers, the government is seeking to find permanent solutions to their problems," he said while addressing the joint sitting of Parliament at the start of the Budget session.

The government's priority is to provide better facilities and assistance to farmers for the entire spectrum of agriculture activities from purchase of equipments and seeds to transportation of produce and its sale, he added.

President Ram Nath Kovind said the government is working with a new approach to cut production cost and provide remunerative price to farmers for their crops. It is providing access to new markets and helping farmers with additional sources of income.

"My government has taken the historic decision of fixing the minimum support price (MSP) of 22 crops at one and a half times higher than the production cost of the crop," the President said.

The centre is ensuring that good quality seeds are supplied to the farmers, who are also being assisted with scientific methods of farming by increasing the number of Krishi Vigyan Kendras.

More than 17 crore soil health cards have been distributed to inform the farmers about the health of the soil. 100 per cent Neem coating of urea has been done to facilitate its availability and to prevent its misuse.

The government is completing 99 incomplete old irrigation projects; and out of that, 71 projects would be completed in the next few months. Microirrigation is also being promoted to ensure full utilisation of every drop of water.

Crop insurance is being provided to farmers at low premium under the Pradhan Mantri Fasal Bima Yojana. A campaign has been launched to link more than 1,500 agricultural mandis online, to facilitate market access to farmers.

Besides that, he said cold storage capacities are being increased to minimise crop damage after harvesting. The ''Waste to Wealth'' campaign is being implemented to ensure that farmers generate additional income out of the crop residue from their field.

Under the blue revolution scheme, the government is providing training to fishermen in deep sea fishing and financial assistance for buying modern fishing trawlers.

These interventions would trigger a "permanent transformation" in our 70-year-old agriculture system, empower farmers, pull them out of their problems," President Kovind said.

Complimenting farmers, the President said, "Despite the scorching sun, heavy downpour, snow fall, or any other challenge; the hard working farmers of our country have toiled day and night to produce record food grain harvest. There has also been an increase in dairy and fish production, as also in other areas."