External Affairs Ministry spokesperson Raveesh Kumar said India has made it "very clear" to the US that the peace and reconciliation in Afghanistan should be Afghan-owned, Afghan-led and Afghan-controlled. 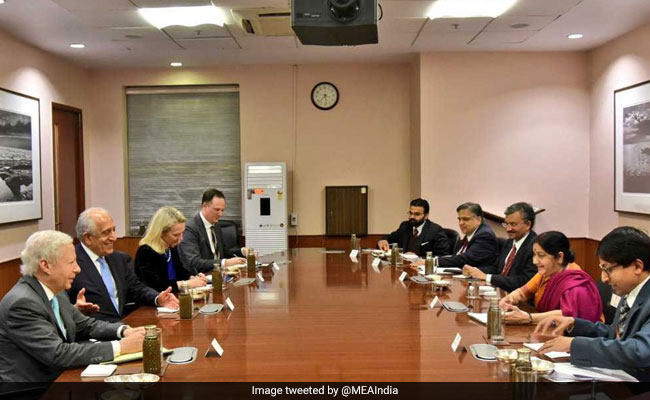 The External Affairs Ministry today said there is no change in the position on Afghanistan and India supports the process which is "inclusive" towards achieving peace.

External Affairs Ministry spokesperson Raveesh Kumar said India has made it "very clear" to the US that the peace and reconciliation in Afghanistan should be Afghan-owned, Afghan-led and Afghan-controlled.

He said this was conveyed during the meetings which US President Donald Trump's special Afghan envoy Zalmay Khalilzad had with External Affairs Minister Sushma Swaraj and Foreign Secretary Vijay Gokhale.

His remarks come a day after Army Chief General Bipin Rawat said India cannot be left out of the "bandwagon" when a number of countries are reaching out to the Taliban.

"This is connected to the comments made by the Army chief. Our position on Afghanistan has been very clear and very consistent. We have said in the past and we continue to do so that India supports the peace and reconciliation efforts in Afghanistan," Mr Kumar said.

"We support the process which is inclusive towards achieving this goal and there has been no change in that position," he added.

The MEA spokesperson said Pakistan's role in Afghanistan is also something which India has articulated time and again.

Army chief General Rawat, during his annual press conference on Thursday, had said: "A number of countries are talking to the Taliban. The issue we should address is -- do we have an interest in Afghanistan. If the answer is yes, then you cannot be out of the bandwagon."