Six cops were suspended on Tuesday night and a murder case has been filed against four of them earlier after nationwide outrage over the incident. 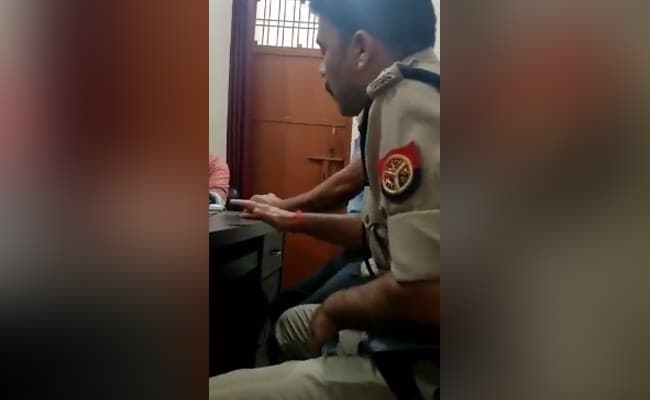 As per reports, the video was filmed by a family member of the killed businessman

A widely shared video on social media shows top officials in Uttar Pradesh's Gorakhpur allegedly trying to dissuade the family of businessman Manish Gupta, who died during a late-night police raid at a city hotel on Monday, from filing a police case in the matter.

Six cops were suspended on Tuesday night and a murder case has been filed against four of them earlier Wednesday after nationwide outrage over the incident.

It was not clear who shot the video but as per reports it was filmed by a family member of the killed businessman during a meeting with Gorakhpur district magistrate Vijay Kiran Anand and police chief Vipin Tada.

Among others, the purported video was shared on Twitter by Sanjay Singh, Rajya Sabha MP of the Aam Aadmi Party and its UP campaign in-charge".

The video appears to show the district magistrate telling the family a court case will take years . "I am requesting you like an elder brother. After a court case, you will not believe, it takes years in court ", Mr Anand purportedly says in the video

The video then appears to show police chief Tada interjecting, saying "they (cops) did not have any previous enmity. They went in uniform and that is why I am listening to you since morning. You asked for them to be suspended and I did that. They will not be reinstated till they get a clean chit."

"I want their jobs taken", a woman's voice says before the two officials appear to realise they are being filmed and ask for it to be stopped.

Earlier Wednesday, condemning the alleged murder, former Chief Minister and opposition leader Akhilesh Yadav blamed it on the "culture of encounters", a practice, he claims, started by the BJP in the state.

The businessman was from Uttar Pradesh's Kanpur. He and two others from different cities were in the hotel room at the time of the raid that took place Monday midnight. The people with the victim told media that they were business associates and had come to Gorakhpur to meet a common friend.

"The three of us were sleeping in our room. Around 12:30 AM, the doorbell rang. I opened the door and there were five-seven policemen there along with the boy from the reception. They came inside the room and started asking us for IDs. I showed my ID and then woke up Manish. He asked the cops why we were being troubled this late at night. The cops then started threatening us," Harveer Singh, one of the men who was inside the hotel room, told reporters. Mr Singh said he lives in Haryana's Gurgaon.

"They appeared drunk. I was slapped by one of the policemen. Some of them had guns. The cops then took me outside. A while later, I saw Manish was being dragged out of the room by the cops and there was blood all over his face," he added.