At NDA "Unity" Meet In Bihar, An Absentee, Awkward Dinner, No Speeches 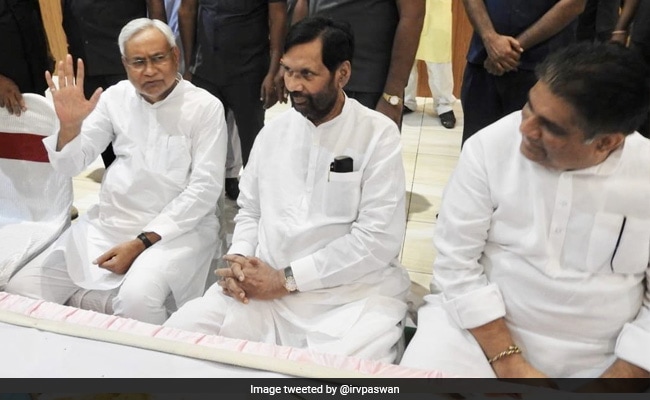 Patna: It was publicised as a gathering of the four constituents of the ruling National Democratic Alliance (NDA) in Bihar, meant to display a show of unity. The event organized to mark four years of the central government was supposed to be a huddle of leaders from the BJP, JD(U), LJP and RLSP highlighting the achievements of the centre, followed by a dinner. In the end, all that happened was the dinner. No speeches by any of the leaders who preferred not to speak to the media.

RLSP president Upendra Kushwaha --- also a union minister --- stayed away citing other engagements, choosing to send some of his top aides.

The meeting called by the state BJP for better coordination among the allies comes ahead of the seat-sharing talks for next year's general elections.

It comes against the backdrop of discordant voices from the JD(U) and BJP over who --- Chief Minister Nitish Kumar or Prime Minister Narendra Modi --- should be projected as the NDA face in the state for the 2019 Lok Sabha polls. The JD(U) has demanded that Mr Kumar be the face of the coalition in Bihar.

Today, the RLSP struck a jarring note. Hours before the meeting, the party's working president asserted that it should be Mr Kushwaha instead. He went a step further, saying his party boss should also be projected as the chief ministerial candidate for the next assembly elections in Bihar due in 2020.

"Given the current circumstances, it is not possible for the NDA to win elections by projecting Nitish Kumar. After the Yadav vote, Kushwahas make up 10 per cent of Bihar's electorate. Ask Nitish Kumar how many votes he can get", said Mr Nagmani.

Mr Kushwaha is said to be upset at the treatment meted out to his party. After the recent bypoll results, BJP chief Amit Shah called up LJP chief Ram Vilas Paswan but he hasn't had any communication with Mr Kushwaha whose party had won three Lok Sabha seats in 2014, one seat more than Nitish Kumar's JD(U) who was then in the opposition alliance.

"There is a question mark over NItish Kumar. What's the guarantee that he won't go back to the RJD? We cannot accept him as the leader of the coalition", said Mr Nagmani, claiming that no government can be formed in Bihar without RLSP's support.

"NDA's unity is very strong. Today you have seen it. This unity will take Bihar forward on the path of development", said Mr Prasad.