Justin Trudeau had visited the centre in Mathura run by Wildlife SOS, along with his wife and their three children earlier this week during his India tour. 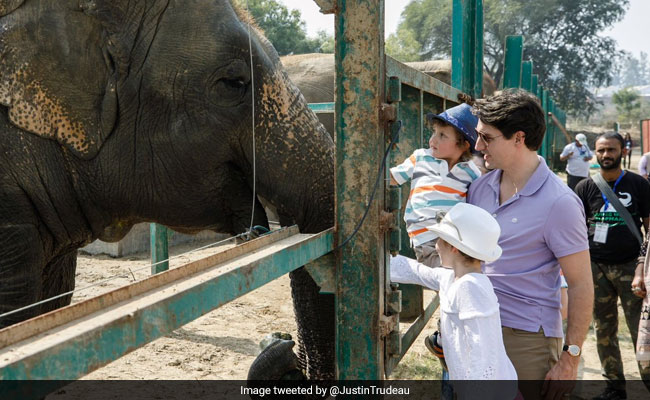 Canada PM Justin Trudeau had visited the Wildlife SOS in Mathura along with his family on Sunday.

New Delhi: Canadian Prime Minister Justin Trudeau was presented with a footprint painting of a rescued pachyderm after his visit to an elephant conservation and care centre in Mathura, a city-based wildlife body which runs the centre said today.

Mr Trudeau had visited the centre in Mathura run by Wildlife SOS, along with his wife and their three children earlier this week during his India tour.

Wildlife SOS founders Kartick Satyanarayan and Geeta Seshamani had welcomed the Canadian prime minister and his family, and presented them an elephant footprint painting - 'Padhchinh' - of resident pachyderm Phoolkali, along with a portrait of the elephant.

'Padhchinh' is a unique series of artwork, born out of collaboration of Singapore-based artist Alpana Ahuja and the rescued elephants at Wildlife SOS - India.

Translating into footprint in Sanskrit, 'Padhchinh' symbolises elephants march towards a safer future. Phoolkali opened the first collection of Padhchinh paintings in December 2013, the wildlife body said in a statement.

The elephant, Phoolkali, was blinded by her owners used for begging. She was rescued from Uttar Pradesh in 2012 after years of abuse and neglect in the hands of her owners that left her with terribly worn out footpads and overgrown cuticles which made it extremely difficult for her to walk or even stand.

Team @WildlifeSOS was honored to have the Hon'ble PM Of Canada, @JustinTrudeau visit our Elephant Conservation & Care Center & learn of the plight of captive Asian Elephants. Here is an appeal by the Prime Minister to protect elephants: https://t.co/rH3OFadJXq#WednesdayWisdompic.twitter.com/tJRs3FGAC3

At the elephant conservation and care centre in Mathura, the Canadian prime minister and his family observed veterinarians providing treatment to the rescued elephants and also learnt about the status of Asian elephants in India, Wildlife SOS said.

We are honored that Prime Minister Justin Trudeau chose to visit the Wildlife SOS Elephant Conservation and Care Center in Mathura and learn about our efforts to protect elephants.

The statement quoting Alpana Ahuja, the Singapore based artist said, "It is a huge honor for me that a piece of art that I helped create with elephant Phoolkali to support Wildlife SOS has a place of pride in the Canadian prime minister s home."

"I hope that the message of elephant conservation travels along with the art to Canada and more people from his country will support the wonderful work of Wildlife SOS to help protect elephants in India," the artist said.
Comments
Justin TrudeauJustin Trudeau India visit