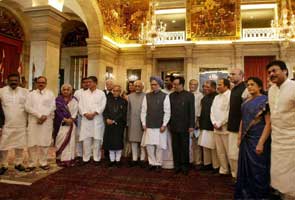 New Delhi: The UPA on Sunday inducted in 22 ministers in the council of ministers; 17 of them are first-timers. These ministers, being seen as the UPA's Team 2014, took charge of their respective ministries today. The Prime Minister, after the ceremony yesterday, told NDTV that this was "hopefully the last reshuffle" before the 2014 general election. (In pictures: The new cabinet)

The Cabinet reshuffle is being projected as a recalibration by the government which has been mired in corruption scandals and criticism of inertia in policy-making. (Read: PM reallocates portfolios)

By introducing young ministers in the cabinet, the government will reward those loyal to leader Rahul Gandhi and signal that this is a government ready to battle for return to power in the next general election. The reshuffle is being seen as having the stamp of Mr Gandhi all over it, who stood next to his mother and the Prime Minister for the national anthem at Rashtrapati Bhavan before the swearing in.

Though there was speculation that he might join government himself in this reshuffle, Congress sources have said that Mr Gandhi is most likely to get a "bigger role" in the party in an internal reorganisation planned soon.

The PM, after the swearing-in ceremony, told reporters, "This is the last reshuffle before the general elections." He also said that it was disappointing that Mr Gandhi didn't join government. (Read: Disappointed Rahul hasn't joined govt, says PM)

After Sunday's reshuffle, Salman Khurshid, aged 59, will replace 80-year-old SM Krishna, who was External Affairs Minister till Friday. Mr Khurshid was the Law Minister and his shift comes amid charges of financial malpractice by his NGO in Uttar Pradesh. By giving him one of the four crucial portfolios (Finance, External Affairs, Home, Defence), his party is defying both the BJP and anti-corruption activists who are gunning for him. (Read: In Salman Khurshid's big promotion, Congress signals it's the boss)

The other significant change is Law Minister Veerappa Moily moving to the Petroleum Ministry in the midst of an on-going conflict between Reliance and the ministry over revising the cost of gas that the corporate giant is extracting from the Krishna-Godavari basin. The ministry was with Jaipal Reddy, who is now going to the Education Ministry, which Kapil Sibal is losing. Shashi Tharoor makes a comeback as junior minister in HRD. Mr Tharoor was forced to resign after allegations of a conflict of interest in his backing of an IPL cricket team linked to his wife, Sunanda Pushkar.

Promoted
Listen to the latest songs, only on JioSaavn.com
Tariq Anwar of the Nationalist Congress Party (NCP) replaced his party's Agatha Sangma, who at 32, was ironically the youngest member of the cabinet. Mr Anwar is now minister of state in his party chief Sharad Pawar's ministry of agriculture.