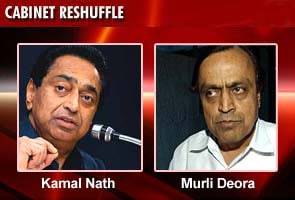 New Delhi: The headline of the Cabinet reshuffle this evening is likely to be the changes to two major economic ministries - Petroleum and Surface Transport.

Sources indicate that Murli Deora is likely to be shifted from the Oil Ministry to Corporate Affairs; Jaipal Reddy will likely get the Oil portfolio.

The other major change - Kamal Nath is expected to lose the Surface Transport portfolio.

The new ministers will be sworn-in this evening, and are likely to include three-four young MPs.  Another Cabinet reshuffle is likely after the Budget Session of Parliament ends in May.

Law Minister Veerappa Moily and Rural Development Minister CP Joshi could see a change in portfolios. Sports Minister MS Gill may see this portfolio being taken away after the massive controversy that surrounded the Commonwealth Games.


The DMK is unlikely to get a berth in the Cabinet to replace A Raja, who resigned as Telecom Minister in November after the 2G scam.  The Congress' Kapil Sibal who took over from Raja will most likely stay on as Telecom Minister. He will also retain his Human Resources Development portfolio. He may be relieved of the Science and Technology portfolio which was given to him after Prithviraj Chavan was moved to Maharashtra as Chief Minister late last year.