"Byju's Forced Us To Resign, Treated Us As Robots," Say Sacked Employees 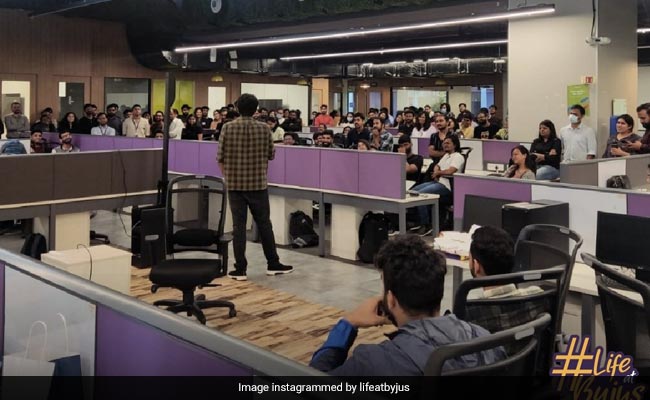 Several former employees of Bengaluru-based Edtech firm Byju's have complained that the company had forced them to resign and resorted to unethical means to have them removed from the company as it apparently sought to achieve profitability. From forcing employees to sign pre-drafted "resignation letters" to hiring bouncers, sacked employees said the company had handed them a raw deal. Byju's, however, has refuted the charges as "unsubstantiated allegations spread by vested interests".

Yesterday, Byju's revoked its decision to lay off 140 employees and shut its operations in Thiruvananthapuram after a meeting between Kerala Chief Minister Pinarayi Vijayan and the company's founder and CEO Byju Raveendran.

In a statement, the Edtech giant said: "Following a detailed discussion between the Hon'ble Chief Minister of Kerala, Shri P Vijayan and Byju Raveendran, Founder of BYJU'S, we have decided to continue operations of our TVM (Thiruvananthapuram) product development centre."

While Byju's continues to maintain that recent layoffs are aimed at avoiding redundancies and the number they are looking at is around 2,500, NDTV has found out that this claim is far from the truth.

Some employees, speaking exclusively to NDTV, claimed that the first phase of firing happened in June this year, when 3,000 employees lost their jobs. The bloodshed has continued ever since, they added.

Nilu Debnath and her husband Rajesh (both names changed) had moved in to Bengaluru this February to work with Byju's. The couple got a shock around Diwali when both husband and wife were forced to resign within a week of each other.

Mrs Debnath later said: "I never got a chance to ask why were they forcing me to resign. We were treated like robots. Byju Raveendran's letter of apology was sent to current employees, but not the ones fired."

Mr Raveendran had written to employees last Monday, apologising for the 2,500 layoffs announced by the company and claiming that the move was aimed at achieving profitability by the end of the 2022-2023 financial year.

Recounting her bitter experience, Mrs Debnath further said that on the day of the sacking, she was told that it was her last day at work and she needed to start the exit process. "You have to fill your success factor and fill in your last working day as today," she was told.

She said the entire process of terminating her was conducted on Zoom.

Her husband said he was given no notice and was forced to sign on a resignation letter drafted by Byju's, with the threat of termination and no end-of-service benefits if he did not quit on his own.

Sharing his experience with NDTV, Mr Debnath said: "If you argue, then there is no compensation at all. If you cooperate, you get a month's salary."

He further said that Byju's had drafted the resignation letters in advance and made the employees sign on those. "We have created content for five years, so that they could fire us now," he added.

On October 12, 2022, Byju's had announced that it would be laying off 2,500 employees to avoid redundancies. Those forced to go say bouncers were hired by the company to handle any untoward situation as employees were suddenly asked to leave.

Stephen Raj (name changed), who was hired three years ago by Byju's, said he felt as if he had been treated like a "use-and-throw" item.

"I have even worked for 24 hours a day due to excess workload. Yet, I was put on the bench. I was told that it'd be better if I signed the resignation letter. Otherwise, they'll sack me," Mr Raj said.

He added that the number of those sacked could go up to 5,000.

Byju's, however, has refused to accept these charges. "BYJU'S denies that the job cuts are more than 2,500. We are a responsible organisation and are treating each employee impacted by the restructuring with the empathy they deserve and need at this time," a statement from the company said today.