By-Polls In Parliamentary Seats Since 2014: The BJP Report Card 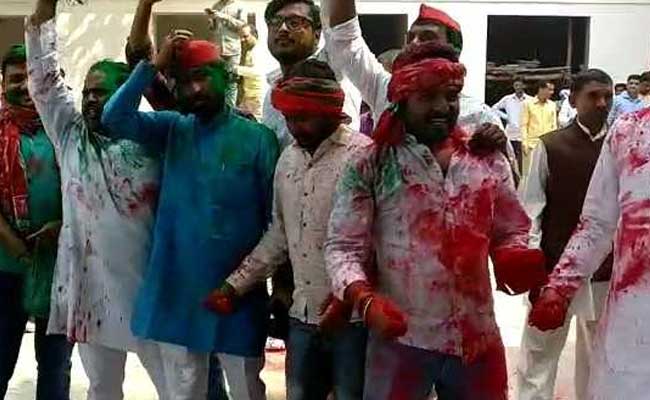 The Samajwadi Party won the by-elections in Gorakhpur and Phulpur today.

New Delhi: Since the BJP came to power in 2014 general elections with a massive mandate - 282 of Lok Sabha's 543 seats --  the party has lost six seats in subsequent by-elections. The last of these defeats came yesterday, when the party lost the prestigious Gorakhpur and Phulpur seats of Uttar Pradesh - vacated in 2017 by Chief Minister Yogi Adityanath and his deputy Keshav Prasad Maurya after the party's sweeping victory in the assembly elections.

It managed to retain four seats and currently holds 272 seats in the Lok Sabha, excluding the Speaker. The party's loss has been gain to the opposition Congress, which won four seats, and the Samajwadi Party, which scored yesterday's big victory.

The BJP lost its first seat to the Congress in Ratlam, party bastion Madhya Pradesh, in 2015. In 2017, the Congress, fresh from its victory in the Punjab assembly elections, wrested the Gurudaspur seat, long considered an Akali-BJP stronghold, won four times by actor-politician Vinod Khanna.  Punjab cabinet minister and former cricketer Navjot Sidhu called it an "innings defeat" for the Akali-BJP combine.

Last month, the BJP lost the crucial Ajmer and Alwar seats to Congress in Rajasthan, considered one of the key BJP states along with Gujarat and Madhya Pradesh. After an assessment, the party had put it down to the Rajput anger over the controversial Bollywood movie Padmaavat and the series of attacks by cow vigilantes in Alwar.

But its biggest loss of face came yesterday, after it lost Gorakhpur, held for five consecutive terms by Yogi Adityanath. Before him his mentor and head of the Gorakhnath temple mentor Mahant Avedyanath won the seat thrice. For this election, Yogi Adityanath had spearheaded the campaign, holding at least 20 rallies and roadshows in the constituency. Party candidate Upendra Shukla had sought votes the Chief Minister, saying it was a question of "respect" for the saffron-robed head of the temple that dominates the town.

That the losses this year occurred in states ruled by the party -- Rajasthan and Uttar Pradesh -- had added to the cheer in the opposition camp, which is hoping that it is an indication of the results that could be expected in next year's general elections.

Bengal Chief Minister Mamata Banerjee called it "beginning of the end'. Congress leader Jyotiraditya Scindia said it was "very clear" that BJP is being "shown the door by the people". CPI leader D Raja said it proved the BJP is not invincible. "If there is so much public anger here, imagine the (condition of) the rest of the state," said SP chief Akhilesh Yadav.

Promoted
Listen to the latest songs, only on JioSaavn.com
The BJP has attributed the loss to being unprepared for the last-minute alliance between Akhilesh Yadav and Mayawati. Last week, in an interview to NDTV, Union minister Kiren Rijiju said while defeat in any election is bad, by-elections do not reflect the macro situation.

By-elections are mostly based on "local issues and part of the outcome depends on the candidate", Mr Rijiju said.  During the Lok Sabha elections, which will be contested under the leadership of Prime Minister Narendra Modi, people consider which party can ensure their well-being, he added.