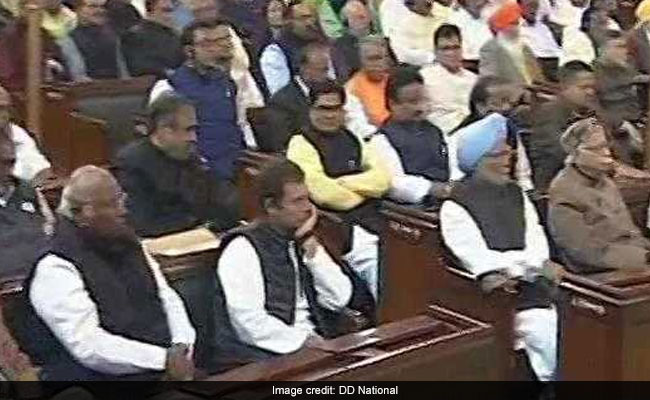 Rahul Gandhi was a new face in the front rows of the central hall of parliament as President Ram Nath Kovind addressed both houses on the opening day of the Budget session. The Congress president sat beside former Prime Minister Dr Manmohan Singh and Mallikarjun Kharge, the party's leader in the Lok Sabha. Rahul Gandhi's mother and former Congress president Sonia Gandhi is still in Goa and is expected to return on Sunday.

Sonia Gandhi rarely misses parliament sessions but has reportedly been advised to stay away from Delhi, one of the world's most polluted cities, because of her asthma.

Rahul Gandhi also spent the weekend in Goa with his mother; his younger sister Priyanka Gandhi Vadra, who will debut as a Congress general secretary ahead of the national election, is abroad. She is expected to take charge after her return tomorrow.

Rahul Gandhi's visit to Goa became controversial after he called on Chief Minister Manohar Parrikar, who is severely unwell with a pancreatic condition.

Hours after his visit on Tuesday, Rahul Gandhi claimed at a rally that Manohar Parrikar had told him he had nothing to do with the deal for 36 Rafale jets announced in 2015 by Prime Minister Narendra Modi. He didn't specify when.

Mr Parrikar hit out at Mr Gandhi for his comments, accusing him of lying for petty political gains and targeting a person who is battling a "life-threatening disease".

The Congress chief wrote back saying he had never claimed Rafale was discussed in their meeting, and that whatever he had said was in the public domain. He also said the "unusual attack" came from immense pressure from PM Modi.