Union Budget 2020: Finance Minister Nirmala Sitharaman said this budget was aimed to boosting incomes and enhancing purchasing power, stressing that the economy's fundamentals were strong and inflation was well contained. 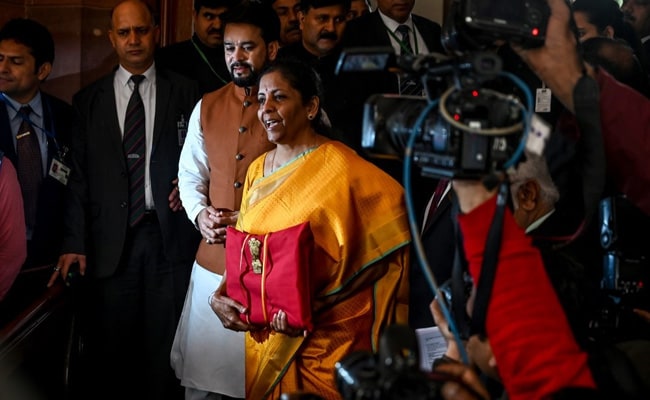 Finance Minister Nirmala Sitharaman said this budget was aimed to boosting incomes and enhancing purchasing power, stressing that the economy's fundamentals were strong and inflation was well contained.

Here's a short list of winners and losers from Saturday's budget announcements.

Nirmala Sitharaman unveiled plans for highways and railways, proposing 1.7 trillion rupees ($23.7 billion) for transport infrastructure that includes the accelerated development of highways and plans to monetize 12 lots of highway bundles.

The government's plan to encourage the manufacture of mobile phones, electronic equipment, and semiconductor manufacturing as well as medical devices will be positive for companies such as Dixon Technologies, Amber Enterprises, Subros, said Vinay Pandit, Head of Institutional Equities at IndiaNivesh.

The minister announced that the rail service will be equipped with air conditioned freight cars and the government will provide viability gap funding for warehousing.

Container Corporation of India Ltd is set to be the biggest winner off the announcements on freight trains, cold storage and warehousing. The Fast Moving Consumer Goods Index rallied, while Emami, Hindustan Unilever, Dabur, Tata Global are set to rally further.

Shakti Pumps India Ltd. jumped the most in three weeks after the announcement of proposals to help farmers set-up standalone solar pumps to allow them to make a living out of their barren land.

The government is also further developing Bharat Net -- or Bharat Broadband Network Ltd. -- a program to bring broadband to villages. The government plans to provide 60 billion rupees for the project in the next fiscal year.

The establishment of degree-level, fully-fledged online education programs to be offered by by institutions who are ranked within the top 100 in the national institution ranking framework will see online educators like National Institute of Information Technology and MT Educare benefit.

The announcement of a forthcoming policy to allow the private sector to build data center parks could potentially benefit all IT firms, including TCS, Infosys, Wipro, HCL Technologies, Tech Mahindra, along with mid-sized firms like LTI, Mindtree, Persistent, and Hexaware.

Adani Enterprises also stands to benefit from this development.

India plans to expands its national gas grid to 27,000 kilometers from 16,200 kilometers.

The finance minister stayed silent on infusing new capital into state-run banks for 2020-21. If the government doesn't inject fresh capital, it would be the first under the Modi government since 2014.

Rashtriya Chemicals & Fertilizers Ltd. extended declines among fertilizer manufacturers after Nirmala Sitharaman proposed balancing the use of chemical fertilizers with a change in incentives. She also announced a renewed focus on zero-budget farming which significantly cuts down on fertilizer consumption.

The delay in the country's long-awaited National Logistics Policy will be a disappointment for key players such as Blue Dart, Gati and Mahindra Logistics who have been waiting several years for the announcement.

Shares of real estate companies like Godrej Properties, Oberoi Realty Ltd., and DLF Ltd. and Prestige Estates declined when the finance minister did not announce any specific measure for the sector. The property sector had demanded measures to enhance credit availability for developers, an industry status and other measures that could propel sales.

The proposed cut in personal tax rates that will likely enhance purchasing power of middle class and continuation of tax sops for affordable housing announced in the budget failed to enthuse real estate stocks.