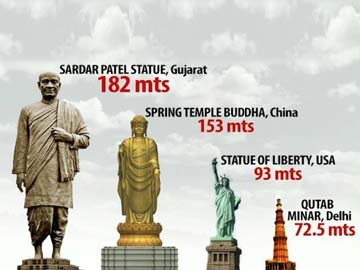 That is more than the new government's allocation for women's safety - Rs 150 crore. Other schemes for women have been allotted Rs 50 crore and Rs 100 crore.

Critics have questioned the Modi government's priorities at a time India is struggling with an alarming spurt in crimes against women.

Mr Jaitley said in his budget speech, "Sardar Patel stands as the symbol of the unity of the country."

He told NDTV that he had "absolutely no regret" about his budget for the statue, adding that leaders like Sardar Patel have to be honoured.

Joining in the criticism, Congress MP Shashi Tharoor had earlier tweeted, "NDA priorities: 100cr for "beti bachao/beti padhao" vs 200cr forPatel statue in Gujarat. I suppose forBJP neither beti nor murti has a voice..."

Mr Modi, who ruled Gujarat for 13 years till he took over as PM in May, championed the project to build the 182-metre iron and bronze Sardar Patel statue on an island off river Narmada. It is planned as the world's tallest statue, twice the size of the Statue of Liberty. Last year, Gujarat ministers and officials went on a mission to collect donations of cash and iron from across the country.

A chunk of the Rs 2,500 crore project will now be funded by the Centre.

The statue is seen as an unsubtle attempt by Mr Modi and his party to undermine the Congress party and appropriate one of its independence-era icons.