The Bahujan Samaj Party chief met Vice President Hamid Ansari, who is chairman of the Rajya Sabha, this evening to hand over her resignation.

Mayawati handed over her resignation to Vice President Hamid Ansari, who is chairman of the Rajya Sabha.

New Delhi: Mayawati, Bahujan Samaj Party chief, has resigned from the Rajya Sabha hours after she had angrily walked out of the Upper House of Parliament today declaring she would quit if she was not allowed to speak on what she called frequent attacks on Dalits in Uttar Pradesh.

The 61-year-old met Vice President Hamid Ansari, who is chairman of the Rajya Sabha, this evening to hand over her three-page resignation letter and said she had detailed in it her reasons for quitting. "I simply wanted the Rajya Sabha Chair to pay attention to atrocities against the less fortunate sections of the society, especially Dalits. And as a representative, when I'm not being allowed to speak for them, I have no choice but to resign," said Mayawati, who earlier said she has been asked in Parliament to limit her speech to three minutes.

The dramatic move is seen as an attempt by Mayawati to consolidate her core Dalit support base and re-establish herself as the sole leader of the community after a debilitating defeat in the Uttar Pradesh assembly elections earlier this year. Her party could win only 18 seats with the BJP seizing power by winning more than 300 of the state's 403 seats and making major inroads into UP's significant Dalit vote. 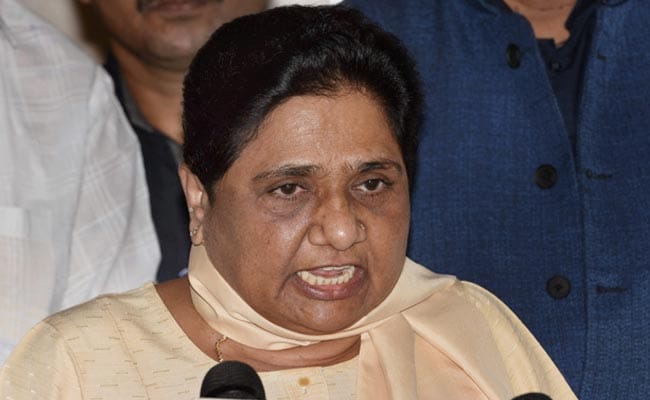 There is also speculation that Mayawati could seek to contest a Lok Sabha by-election in UP to return to Parliament as she gets down to the task of rebuilding her party in the state in time for the 2019 general election. Her Rajya Sabha term in the Upper House ends in less than a year and re-election will be a tough task, after her party's poor performance in UP.

The only way she can hope to return to the Rajya Sabha is with the support of the Congress and arch rival Samajwadi Party. Members of the Upper House of parliament are elected by legislators of the state they represent.

Soon after the Rajya Sabha convened this morning for the second day of the monsoon session, Mayawati, a former Uttar Pradesh chief minister, sought to speak, alleging that Dalits were being targeted in Saharanpur in the BJP-ruled state. She was soon seen walking out in a rage.

The Opposition rallied around Mayawati, with the Congress too walking out after Union Minister Mukhtar Abbas Naqvi said the BJP has a mandate to rule UP and alleged that the BSP chief was attempting to score political points and not speak for Dalits. Mr Naqvi also said Mayawati "must apologise" for being disrespectful and challenging the Chair.

Promoted
Listen to the latest songs, only on JioSaavn.com
"When Mayawati tried to talk, she was told that we have got the mandate. We did not know the BJP has got the mandate for massacre of minorities and Dalits," said the Congress' Ghulam Nabi Azad, who is Leader of the Opposition in the Rajya Sabha.

Opposition leaders tried to persuade Mayawati to change her mind on resigning, but in vain.