Mr Doval is scheduled to visit China for a meeting of National Security Advisors from BRICS countries - Brazil, Russia, India, China and South Africa - on July 27-28. He is likely to discuss the standoff with his Chinese counterpart Yang Jiechi. 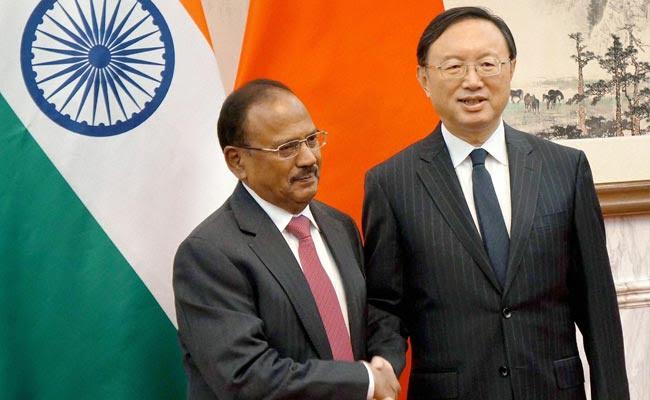 In its editorial titled 'It's never too late for India to mend its way', China Daily pressed for exploring ways to avoid confrontation.

Mr Doval is scheduled to visit China for a meeting of National Security Advisors from BRICS countries - Brazil, Russia, India, China and South Africa - on July 27-28. He is likely to discuss the standoff with his Chinese counterpart Yang Jiechi. Both officials are also the Special Representatives of their countries for the boundary talks.

The military standoff began on June 16 after the Chinese army tried to build a road near the Bhutan-India-China trijunction. India has protested the construction of the road, and is concerned that it would allow China to cut India's access to its northeastern states.

"There are still hopes that the deadlock can be resolved peacefully, which serves both countries' best interests," the China Daily said.

Mr Doval's visit is "hoped" to "carry on that slight shift in India's previously bellicose stance", it said, referring to Foreign Secretary S Jaishankar's recent comments that both the countries should not let their "differences become disputes".

"The two sides need to explore ways to avoid confrontation. It would be damaging to both countries and regional stability if India cannot use its reason and wisdom to avoid the military collision both countries are currently on course for," it claimed.

But The Global Times, part of the Communist Party's publication group, said in its editorial that Beijing will not "talk" until Indian troops were withdrawn. "As Doval is believed to be one of the main schemers behind the current border standoff between Chinese and Indian troops, the Indian media is pinning high hopes on the trip to settle the ongoing dispute," it alleged.

"New Delhi should give up its illusions, and Doval's Beijing visit is most certainly not an opportunity to settle the standoff in accordance with India's will," it said. It added that India should not take lightly yesterday's comments by the Chinese Defence ministry that New Delhi should not "harbour any illusions" and withdraw troops.

Promoted
Listen to the latest songs, only on JioSaavn.com
The two editorials come a day after the Chinese Foreign Ministry hinted that a bilateral meeting between Ajit Doval and Yang Jiechi could happen on the sidelines of a BRICS NSAs' meet.

India has maintained that both the countries withdraw troops from the disputed area and resolve the issue through talks.