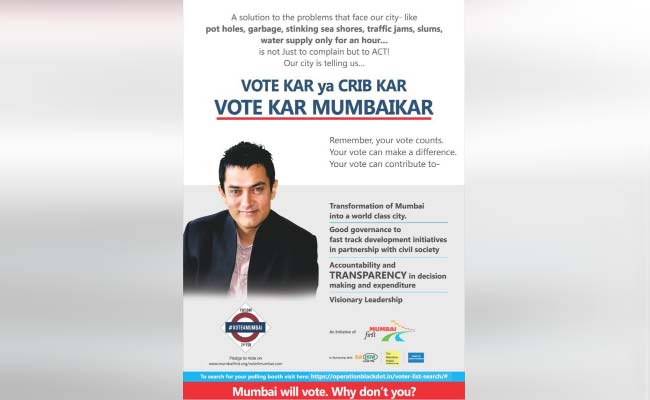 The ad featuring Aamir Khan was issued by an NGO, Mumbai First, urging the city to vote.

Mumbai: A full-page advertisement featuring Bollywood star Aamir Khan in major newspapers on Tuesday has sparked a row, with parties like the Shiv Sena and the Congress alleging that it violated the election code of conduct and seemed to promote the ruling BJP in Mumbai's mega civic election. The ad was issued by an NGO, Mumbai First, urging the city to vote and talked about potholes and garbage while saying - "vote kar ya crib kar (you can either vote or crib)."

The Shiv Sena, which has controlled the BMC for the last two decades, is enraged. Dharmendra Mishra, a leader of the party's youth wing Yuva Sena, has complained to Maharashtra's Election Commission, alleging that the tone and content of the ad seems to push for a change of power in the BMC.

The rival parties have also argued that the use of words like "transparency" and "transformation," used also in the BJP's election campaign for the civic polls amount to an attempt to influence voters.

"The advertisement in English and Marathi newspapers clearly highlights the issues of transparency and change promoted by the BJP," said the Congress' Sachin Sawant, also alleging, "Although it has been issued by an organisation, everybody knows its close association to Devendra Fadnavis. This is a blatant violation of the code of conduct."

The BJP contested the BMC elections on its own this time after the Shiv Sena announced an end to their two-decade old partnership.

The immediate provocation was their inability to agree on seat sharing, but the Shiv Sena has been sullen for months ever since the BJP's wins in the parliamentary and assembly elections of 2014 turned it into the senior partner in the alliance. It has regularly attacked the BJP governments at the Centre and the state though it partcipates in both.

The BJP and Chief Minister Devendra Fadnavis gave it back in full measure, leading to a bitter battle that was often personal. The BJP's campaign has ripped into the Shiv Sena for what it has called a complete neglect of the city.

Tuesday's ad lists "potholes, garbage, stinking sea shores, traffic jams, slums" and poor water supply as problems that demand an immediate solution and says that solution is "to act and not just complain." A big photo of Aamir Khan dominates the ad, urging citizens to come and out vote in big numbers for accountability and transparency.

The Nationalist Congress Party's Nawab Malik pointed to an order of the Election Commission, saying no advertisement can be published 48 hours prior to the polling day. "The BJP has a role to play in this advertisement. The NCP will take up the issue with the SEC and ensure an FIR is filed against those involved," he said.

"Raising issues faced by citizens for awareness in the election is the right of any organisation. We will take action if a nexus is proved by the complainant," said State Election Commissioner J S Saharia.

Mumbai First CEO Shishir Joshi told MidDay that the sole aim of the advertisement was to encourage citizens to vote.

Promoted
Listen to the latest songs, only on JioSaavn.com
Mumbai set a record on Tuesday with 56 per cent voting, the highest in 25 years. Elections were held not just to the BMC, Asia's richest civic body, but also to nine other major municipal corporations.