Blog: When Rahul finally met the press and dropped a 'bombshell' 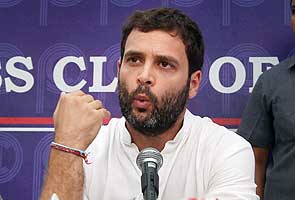 New Delhi: For a long time now, all of us covering the Congress party have been prepped for a "big" event - the party managers have been talking about the party number two Rahul Gandhi meeting us for a press conference.

What's the big deal, most people would say. But if you are a reporter covering the Congress party, you have no idea what this party leader thinks on any issue. You don't know if he is for or against death penalty, you have no idea how he's planning to tackle Narendra Modi, and yes, no idea whether he supported the ordinance on convicted lawmakers or not.

We wouldn't have imagined that we would know very soon. So there was the party's spin doctor-in-chief Ajay Maken, at a very routine event to inaugurate the Press Club's new gym, built with his MPLAD fund, trying to defend why the ordinance was perfect in law.

Just when he was failing to convince us cynical hacks, we saw his secretary waving a phone. It was obviously a call he couldn't say no to as he stopped the press conference and said "I have to take this call.'' It amused us all to see him rush off and we asked out loud, "Mr Maken, is it Sonia or Rahul?"

But none of us really expected what Mr Maken announced next. "You will be very pleased and pleasantly surprised to know that Rahul Gandhiji will be joining us very soon." I don't know about pleased but the last time I attended Rahul Gandhi's press conference was in 2008 in Orissa on his first Discovery of India tour. So this was going to be a big story, of that I was sure.

As I alerted NDTV editors to expect this press conference, I saw Special Protection Group (SPG) arrive. That meant only those of us who turned up for Ajay Maken's press conference would get to attend Rahul's - I could see the other poor reporters on the beat killing themselves for missing out this one. They would have some explaining to do to their editors.

Ushered in by Press Club members, since it was their event after all, Rahul was his usual, 'let's get straight down to business' self. He wanted to start speaking immediately but journalists compering the show weren't going to let him get away with it. "Hang on, Rahul," said veteran Anand Sahay, to which the Vice President laughed and accepted. So we heard a nice warm story about how Rahul's father, Rajiv Gandhi, had come to the Press Club last when OB vans were brand new and how things had changed since then.

Rahul didn't acknowledge that at all. "This is not a press conference, I'll just say what I have to say as I heard Ajay Maken is being questioned about the ordinance and I wanted to make my stand clear and that's why I came."

Then he proceeded to virtually tear the ordinance apart with his "complete nonsense" comment; he even suggested it be "torn apart and thrown away", effectively ensuring that the ordinance which Mr Maken had been defending would never see the light of day.

If this was Twitter and Rahul had tweeted this and refused to explain any further like his friend and colleague Milind Deora did, I would have understood. But for him not to take any questions, not to explain why he had kept quiet so far, not explain how his mother Sonia Gandhi felt about this or whether he had spoken to the Prime Minister Dr Manmohan Singh or not, seemed unfair.

It was unfair to journalists, but most of all, it seemed unfair to someone who he seemed to back all along - Dr Manmohan Singh, who is far away in the US.

Dr Singh has been forced to issue a reaction from Washington ahead of a very important and much-watched meeting with US president Barack Obama. Back home the opposition has begun to demand his resignation.
Comments
Rahul GandhiCongressordinance on convicted netas