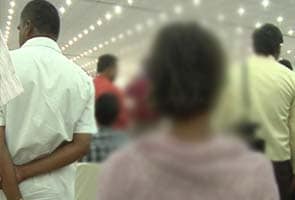 New Delhi: As political journalist, one cliche that we often use: a week is a long time in politics. But this week sadly reminds us that it is true of horrific crimes as well. As Delhi prays and expresses outrage for the five-year-old, I am reminded of a story that my colleague, Uma Shankar Singh (from NDTV India) filed last Sunday (April 14).

The venue was the Constitution Club and the event, Nitish Kumar's Modi ultimatum to the BJP. Journalists present there were so pre-occupied with whether or not Janata Dal (United) and BJP were parting ways that they failed to notice the odd presence of a brave father and his teenage daughter in a crowd of white pyjama-kurta clad netas.

The father had come there in search of justice, all the way from Gamariah village of Chappra district in Bihar. On July 1, last year, his 14-year-old mentally challenged daughter was raped at the village primary school. The incident took place when the girl was sitting with her grandmother in the courtyard of her house. A neighbour took her away on the pretext of giving her a chocolate and brutalised her. The girl could barely explain to her family the trauma she went through. But she managed to identify eight men who were present at the scene of crime.

When the matter became public, village elders advised the family to reach a compromise with the accused. The usual argument of social stigma was playing out to silence the family. The father, a worker in a private firm in Noida, showed courage. He went to his village on learning what had happened to his daughter and insisted on registering an FIR against the accused at an all-women police station.

Investigations by the local police claim that seven of the eight accused are "innocent" and one person has been found guilty of raping the minor. But even the main accused is not behind bars as he has managed bail.

So, a brave but helpless father runs from one government office to another, one political rally to another, in the hope that his daughter will get justice.

He was present at the Janata Dal (United)'s national executive in Delhi with the hope that he would be able to somehow get an audience with the Chief Minister. He also hoped that TV cameras would be able to capture his plight, images of his helplessness telecast lives across millions of home would outrage the people against the apathy of a mai baap sarkar.

But his hopes were belied. He didn't have a chance meeting with the CM, journalists were more worried about Nitish's Modi equation and who's going to be the next NDA's Prime Ministerial candidate!

His complaint did not dominate either the headlines or trigger protests of support.

I come from a region, the north-east, where we often see everything through concepts of "alienation and neglect." If the incident happened in Assam and didn't get the kind of media attention it deserved, we would have said: "Assam has fallen off the map. We don't seem to matter to the rest of India and so on."

But this was Bihar, Hindi heartland where Nitish and Lalu flex their political muscle every now and then.

Last year, in May, when national channels telecast Guwahati's shame of a young woman being molested by a mob in front of TV cameras, it resulted in fast tracking of the case in Assam and the accused being convicted in record time.

But sadly for the father of this 14-year-old, VIPs felt neither "disturbed" nor "shocked". And clearly, the 14-year-old's story got lost in a week.

Promoted
Listen to the latest songs, only on JioSaavn.com
Disclaimer: The opinions expressed within this blog are the personal opinions of the author. NDTV is not responsible for the accuracy, completeness, suitability, or validity of any information on this blog.  All information is provided on an as-is basis. The information, facts or opinions appearing on the blog  do not reflect the views of NDTV and NDTV does not assume any responsibility or liability for the same.