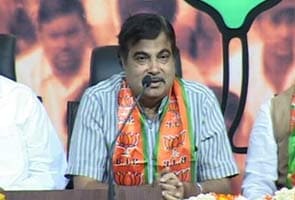 New Delhi: Concerned over party leaders speaking in different voices on crucial issues, the Core Group of the Bharatiya Janata Party (BJP) today decided to hold its meetings every fortnight, seeking to present a united face and nip chances of dissensions spilling out and harming the party in the coming elections.

In today's meeting, chaired by BJP President Nitin Gadkari, the seniormost leaders of the party also discussed the forthcoming Presidential elections. The party still favours opposing the Congress candidate for the top post. The strategy for this was discussed during the meeting.

Worried over leaders expressing views on issues which are at variance with each other or speaking out of turn, the BJP has decided to rein them in.

The Core Group, which is one of the highest decision-making bodies of the party, will also meet twice a month to discuss important issues and present the same viewpoint to the media.

The latest examples where the BJP leaders publicly differed with each other are the choice over the candidate for the Presidential election and the polls in Jharkhand for Rajya Sabha. The opinion of the organisation and the BJP's parliamentary party has also differed on issues.

As a part of this strategy to bridge gaps, the BJP has already decided that Gadkari will attend the parliamentary party meetings.

On the Presidential polls, the party, despite Yashwant Sinha apparently expressing support for Finance Minister Pranab Mukherjee for the top post, is still of the view that doing so would be read as it standing with the Congress.

Leader of the Opposition in Lok Sabha, Sushma Swaraj, had said the BJP will not support Mukherjee or any Congress candidate.

A final view is likely to be taken after talking to other allies of the BJP-led National Democratic Alliance (NDA), sources said.

The BJP Core Group also discussed the crisis in the party's Rajasthan unit where Vasundhara Raje and her supporters had objected to the proposed yatra of party leader Gulabchand Kataria, apparently aimed at projecting him as the party's chief ministerial candidate in the next assembly polls in the state in 2013. Kataria is close to the Rashtriya Swayamsevak Sangh (RSS) and also to party president Gadkari.

While the party claims that the crisis in Rajasthan has blown over and that Raje would remain the number one leader in the state, some changes at the top level in the organisational set-up in the state is likely. A formula was worked out for the same to placate Raje.

The Jharkhand Rajya Sabha election results were also discussed. A section of the BJP's top leadership is miffed that not enough was done to ensure the victory of party candidate and former Deputy Leader of the party in the Upper House S S Ahluwalia. He finished third with 20 votes as only 18 BJP and two JD(U) MLAs had voted for him.

Even the two Independent MLAs who support the JMM-BJP government in the state had voted for Congress.

Promoted
Listen to the latest songs, only on JioSaavn.com
Sources said the continuing crisis in the party in Karnataka also figured in the meeting. State unit President K S Eshwarappa and Chief Minister D V Sadanand Gowda have written letters to Gadkari while former Chief Minister B S Yeddyurappa is demanding that he be reinstated as the chief minister.