Smriti Irani said that Robert Vadra is "merely a mask" in the controversial land deals and his brother-in-law Rahul Gandhi is the "real face". 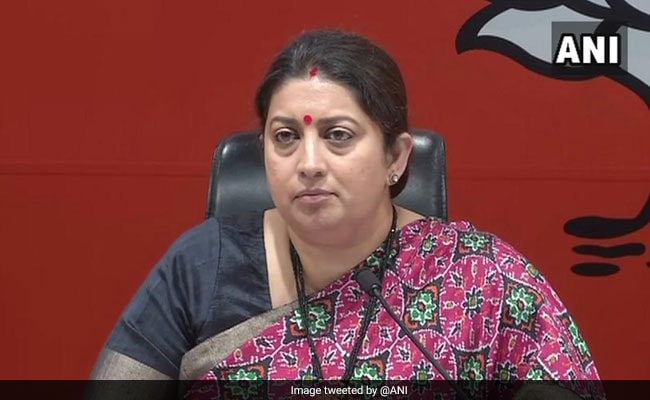 Citing a media report, Union Minister and BJP leader Smriti Irani told reporters that Robert Vadra is "merely a mask" in the controversial land deals and his brother-in-law Rahul Gandhi is the "real face".

At a press conference, Ms Irani said, "The country has come to know that the brother-in-law (Rahul) is also involved with his ''jija'' (Robert Vadra) in this family package of corruption".

Referring to the report, Ms Irani claimed that Rahul Gandhi and Priyanka Gandhi Vadra purchased land in a deal involving H L Pahwa, who was raided by the Enforcement Directorate, and Mahesh Kumar Nagar, who also had a role in land transaction involving Robert Vadra.

Smriti Irani claimed that Gandhi's opposition to a defence deal, an apparent reference to the Rafale transaction, was due to his "financial and family" interests as he wanted a rival company to bag the contract.

The Congress president should answer about his relations with Pahwa in these land transactions, Ms Irani said.

To a question about Union minister Ananth Hegde's controversial comments against the Gandhi family, including Sonia Gandhi, Irani parried the query saying she had not heard his statement but added that she was at the receiving end of the "same team Rahul Gandhi" when it comes to commenting against women.