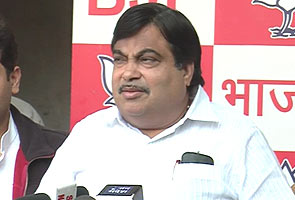 Bhubaneswar: BJP has asked the Centre to immediately declare names of the Indians who had stashed black money in Swiss Banks.

"UPA Government should, without any hesitation, make public names of all those who have stashed black money in Swiss Bank accounts," BJP President, Nitin Gadkari told reporters in Bhubaneswar.

Claiming that about Rs 21 lakh thousand crore had been deposited in Swiss banks, Gadkari said instead of trying to suppress fact, the government should publicise the names, particularly after WeakiLeaks report on the matter.

"Any reluctance in declaring the names of Swiss bank account holders will simply raise doubts about the integrity of people at the helm," he said.

Asked if names of BJP leaders may appear in the list, Gadkari said action must be taken without any consideration.

Claiming to have Swiss Bank account numbers of three persons in the Bofors pay-off case, the BJP chief said a lot of information including alleged transfer of money to Italian businessman Ottavio Quattrocchi's account came to light after Income Tax Appellate Tribunal order.

Similarly, 2G spectrum scam, CWG loot, Adarsh society scandal many other frauds had exposed the alleged nexus between the political brass of the ruling alliance and their co-conspirators, he said.

The BJP president also described as "unfortunate" the affidavit submitted by the Centre in the Supreme Court defending the appointment of controversial CVC P J Thomas facing a corruption case in a Kerala court.

Stating that the Leader of the Opposition, Sushma Swaraj had opposed Thomas' appointment, he wondered if Centre felt there was no need for consensus of the three-member committee on CVC's appointment, for what purpose the panel was formed.

Since appointment of CVC was a sensitive matter, Swaraj's dissent should have been taken into account to ensure fair, independent and impartial functioning, Gadkari said accusing Congress of not following democratic norms.

Stating that BJP stuck to its demand for a JPC probe into 2G spectrum scam, he said steps should be taken to seize and auction assets amassed through corrupt means after they would be unearthed.

Steps should be taken to construct godowns and cold storages in all districts to stock food items, he said. Gadkari also criticised the government for allowing export of rice and sugar at a wrong time leading to shortage. Mounting a scathing attack on Congress-led UPA, the

The BJP chief said the government led by the economist prime minister had lost control over administration as the ministers were busy in blame games.

"While the UPA partners are in near revolt challenging the authority of the prime minister, the UPA chairperson seems to have lost moral authority," he said adding at least two ministers - Sharad Pawar and Mamata Banerjee - had been openly attacking Congress on price rise and other issues.

Gadkari was, however, evasive as to whether some of the UPA partners could join the BJP-led NDA.

Alleging that UPA rule was marred by utter failure on economic front, corruption in high echelons of ruling alliance, misuse of CBI to settle scores with political opponents and appeasement of minorities for vote bank politics, he said only BJP could provide a viable alternative to provide good governance.