The population on these islands is dominated by people from a community of Bengali-speaking Muslims in the state, who are often tagged as illegal immigrants from Bangladesh. 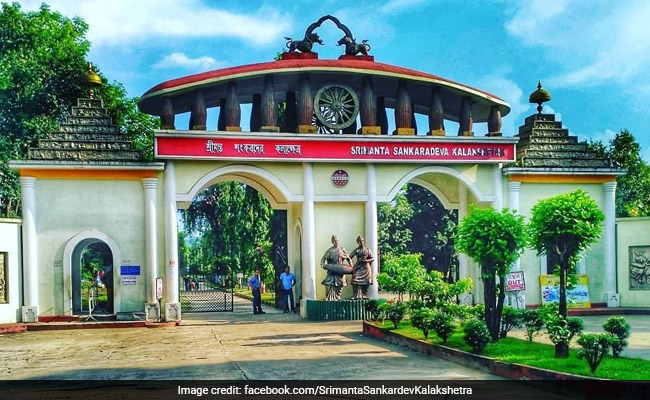 The museum was proposed to be set up at Srimanta Sankaradeva Kalakshetra in Assam.

The Bharatiya Janata Party (BJP) in Assam has rejected the recommendation of the state assembly's departmentally-related standing committee on education for building a museum in Guwahati to highlight the culture and heritage of the people who live in the "char-chaporis" - the northeastern state's riverine islands or sandbars.

The population on these islands is dominated by people from a community of Bengali-speaking Muslims in the state, who are often tagged as illegal immigrants from Bangladesh.

BJP state president Ranjit Kumar Dass today said that this proposal is "unacceptable", despite the fact that a 15-member committee which had passed this recommendation consisted of 10 members from the ruling BJP and its allies.

"There is no question of setting up of such type of museum under Kalakshetra (a cultural institution that documents the culture of communities in the state)... In the recommendations, the word 'Miya' was never mentioned but we all know that migrants are settled in Char areas and it is a difficult task to find out who is a foreigner and who is of Indian origin" Mr Dass said.

He said even though the committee has 15 members, the meeting was attended by only five members -- three of them from the BJP.

"Kalakhestra is the outcome of the Assam accord, it promotes Assam's indigenous culture and heritage, the ideals of Srimanta Shankar Dev... how can that be compromised? The Congress is trying to rack up sentiments of people from a particular section in lower Assam where its popularity is dipping," Mr Dass added.

On October 18, Congress MLA Sherman Ali Ahmed had written to Assam's Director of Museums requesting him to speed up the process of setting up a museum in the premises of Srimanta Sankar Dev Kalaksthera in Guwahati to preserve the culture of the "char-chaporis".

The letter was sent after the standing committee in March this year tabled a report in which the museum was part of several recommendations.

Last week, Assam minister Himanta Biswa Sarma said: "The Assam government makes it clear that no 'Miya' museum or any other such museum will be allowed to be set up in Srimanta Sankaradeva Kalakshetra. No one will establish it, not even Museum Director"

Mr Ali, the Congress MLA, today said: "The report of the committee was tabled in state assembly on March 24, no one opposed it and it was passed. Even in the meeting, when I proposed the museum, no one contradicted me rather they supported it. If they are Bangladeshis, why don't they deport (them)? They have a very strong government at the Centre and have also been ruling Assam since four-five years, so what is stopping them?"

The "char" are riverine islands that dot the Brahmaputra river and its tributaries. These islands and islets are found mostly in Lower and Western Assam, where Bengali-speaking Muslims are often the "majority" community in terms of population. Overall, an estimated 25 lakh people live in chars.

In the 2016 Assembly polls the BJP rode to power on an aggressive campaign that promised to protect the land, community an heritage of Assam's "indigenous" people from what the party called "expansion of illegal migrants from Bangladesh". Assam returns to polling booths next year, with Chief Minister Sarbananda Sonowal's BJP government looking to retain power.