Amit Shah takes over the Home Ministry from Rajnath Singh, who has been given charge of the Ministry of Defence. 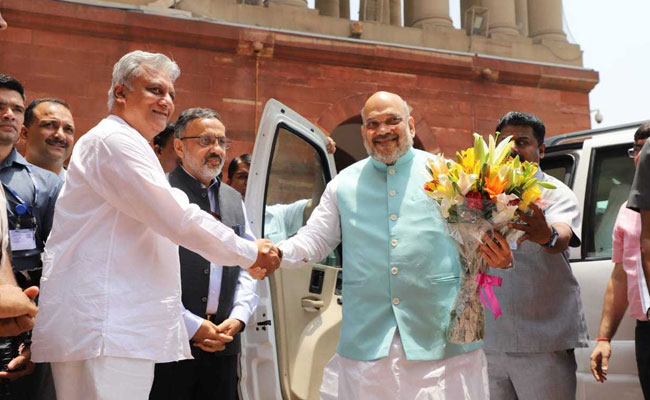 As Home Minister, Amit Shah will play a crucial role in defining the centre's relationship with states.

BJP chief Amit Shah stepped into his new role today as he took charge as the country's Home Minister, two days after he took oath for the first time as a cabinet minister in Prime Minister Narendra Modi's government.

The 54-year-old, wearing a light blue jacket over his white kurta, could be seen walking inside the North Block, taking charge of his office around noon today. At his North Block office, he was received by Union Home Secretary Rajiv Gauba and other senior officials.

"Took over as the Home Minister of India today. I express my gratitude to the Prime Minister for believing in me. The security of the country and the welfare of the countrymen is the top priority of the Modi government, I will make every effort to complete it," he tweeted today.

Amit Shah takes over the Home Ministry from Rajnath Singh, who has been given charge of the Ministry of Defence - a move that could be seen as a pared-down posting despite being within the "Big 4" grouping of Home, Finance, Defence and External Affairs.

Known for his ability to take tough decisions, Amit Shah is expected to give new shape not only to many aspects of internal security but also dynamics as far as relations with neighbouring countries - especially Pakistan - are concerned. As the Home Minister, he will also play a crucial role in defining the centre's relationship with states.

Jammu and Kashmir could be the biggest challenge before the new Union Home Minister. During election season, Amit Shah had promised voters that the PM Modi-led BJP would annul Article 35A of the Constitution because it discriminates against "non-permanent residents and women of Jammu and Kashmir". He also called for the abolition of Article 370, which allows the state a separate flag and constitution.

The spotlight is also going to linger on illegal immigration under the new Home Minister. "Illegal immigrants are like termites. They are eating the grain that should go to the poor, they are taking our jobs," he had said at a rally in the run-up to the Lok Sabha elections.

Amit Shah, who has been PM Modi's Home Minister during his tenure as Gujarat Chief Minister in the past, was the most notable inclusion in the government among 57 new and old ministers who were sworn in at a ceremony at the Rashtrapati Bhavan on Thursday. Over the last six weeks, he had helped run a hugely successful campaign to raise the BJP's tally to 303 out of 545 seats in the Lok Sabha, up from 282 in 2014, despite losses in key state elections in December.