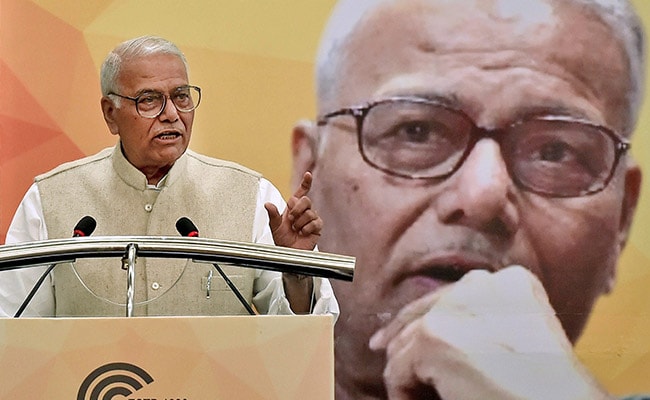 Yashwant Sinha said everybody was scared of "two people" in the BJP. (File)

Former union minister Yashwant Sinha on Wednesday slammed the BJP saying it has become a "murdo ki party" (party of the dead), where only two leaders were ruling the roost, while the others were "scared" to challenge them.

He ruled out the possibility of a change in the Bharatiya Janata Party's (BJP) leadership after its losses in the recently concluded assembly polls.

Mr Sinha was speaking at JS Karandikar Memorial Lecture organised at the Pune Union of Working Journalists on 'Current Political Scenario in India and Media'.

Responding to a question, he said, "There will not be any change in the leadership (of the BJP) because everybody is scared."

"Some people in the BJP would often criticise the Congress and dub it as 'murdo ki party', but today the BJP has become 'murdo ki party'...Only two people hold all the power in the party," he said in an apparent reference to party chief Amit Shah and Prime Minister Narendra Modi.

"Yes, there are speculation and theories that are making rounds that if the BJP gets less numbers in Lok Sabha polls, Gadkari will be the option before it...but I reject the theory as those who are making these speculation or theories viral, they are forgetting that two people have such a hold on the party that a third person cannot come in front of them," he said.

"No one has the courage to go against them, so the theory is rejected that Gadkari has an opportunity," he added.

Mr Sinha took a dig at PM Modi saying, "Generally the prime minister is first among equals in Parliament, but today the situation is that he is the boss."

When asked what if Urjit Patel had resigned as RBI Governor a month ago, he said, "It would have been better had he resigned when the government started the process to invoke Section 7 of the RBI Act, but that time did not come."

Section 7 of the RBI Act empowers the government to give directions to the central bank's governor on issues of public interest.

Mr Patel, who had a run in with the government over autonomy of the Reserve Bank of India, unexpectedly resigned Monday.

"The economic condition of the country is very bad and it is in danger...it would be good if we grasp the situation as soon as possible. But the government is painting a good picture, calling India the fastest-growing large economy.

"But the situation is bad and since there is no money left, neither with the government nor in the market, they are seeking funds from the RBI," the former finance minister said.

On the appointment of Shaktikanata Das as the new RBI Governor, Mr Sinha claimed he has been sent to the central bank with a purpose.

"I hope he does not succumb to the pressure of the government and give away the money," he said.

Mr Sinha praised Congress president Rahul Gandhi saying he made a "responsible statement" after the results of the assembly polls came in and the BJP leaders would now "think twice before calling him 'pappu'".

Asked if Mr Gandhi will be a strong contender in 2019 elections, he said the Congress' track record had not been good.

"We cannot forget their track record includes the Emergency also. However, the leadership of Rahul Gandhi is different from the previous one and I do not think he would toe the same line," he said.